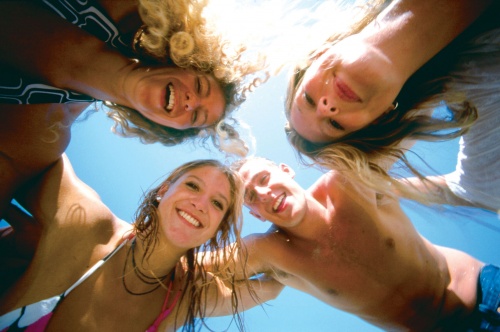 According to a survey conducted by the US Consular Office in Sofia, 95% of the participants in WAT USA 2010 said they had a positive experience. File photo

They are considered an adventure for some people and necessity for others. Reasons may vary but it is a fact that summer USA Work and Travel programs have become a ritual for Bulgarian students.

So do not wonder if you see masses of young people dragging huge suitcases, backpacks and what not, at the Sofia International Airport, most often in May and October.

If this example is not convincing you about the popularity of the USA Work and Travel program among Bulgarian students, take a look at the data, which Kim Atkinson from the US Consular Office in Sofia gave to Novinite.com. In her words, about 6000 student participated in WAT program for the United States in 2010.

“I believe you are the fifth largest in the region, which includes all of Europe, including Russia, for sending students to the USA. It is a very popular program. We just conducted a survey of those students coming back, and something like 95% came back and said they had a positive experience,” Atkinson said.

She explained that it is very important that students go on this kind of programs and work in jobs that are meaningful – where they can earn money, or they can practice their English, they can have contacts with the average American and they can travel.

“This is the whole point of the program. We do these kind of surveys to make sure the program is meeting its goals and that the students aren’t in any kind of way going to the US and working 60 hours a week, and not being paid. We don’t tolerate that at all. So I was very happy to see that the vast majority of the students achieved what they wanted to,” she said.

According to Ina Dobrilova, Marketing Communication Specialist at “Orange,” the number of participants in the WAT USA program increased by 10% in 2010, compared to last year.

“The increase of the value of the dollar and the fact that this year’s participants came back happy make us believe that the interest towards the program will continue to increase in 2011 as well,” Dobrilova said.

There are about 20 WAT agencies in Bulgaria, which have provided the services for these 6000 students.

Iana Simeonova, Managing Director at “GTCE,” said that the agencies that have many years of experience with WAT programs in Bulgaria are about 9-10, but other companies that have different main activities include the service as well, which makes the total number of agencies around 20.

“The popularity of the agencies depends on their experience in the field, as well as on them combining with other products the company offers, which could improve the service pack of the program. Students’ impressions after returning are also important,” Simeonova said.

In her words, the United States continues to hold the first place for desired destination for Work and Travel. However, students have started to look for alternatives.

“In the last two years, there was an increase of students, interested in WAT programs in Europe, mostly in the United Kingdom and Greece. The reasons are mostly the smaller investment in programs in Europe and the stronger European currencies,” Simeonova said/

The “Orange” representative has agreed with this statement and has added that besides WAT programs, many people have become interested in language courses as well.

“Only 1 of every 30-40 people is interested in WAT Europe. However, the number of Bulgarians interested in language courses abroad in increasing, especially for England, Malta, Germany, France and Italy,” Dobrilova said.

However, still most of the students prefer to cross the ocean in search of their American (summer) dream.

Dobrilova has added that the labor market in the United States offers more opportunities and diversity in terms of job offers. Payment should not be underestimated either.

“The payment in the US is high enough (could be USD 8 to USD 13 an hour), which makes Bulgarians prefer the US to Europe. The job offers in the United Kingdom are in the field of agriculture, which does not provide students with the opportunity to refine their language skills. For comparison, the jobs in the United States are in the tourism field and are related to customer services,” she said, adding that students often buy equipment and clothes at a very good price in the United States.

However, cheap clothes are not the reason that makes Bulgarian students sweat four-five months in the United States. The bigger reason, according to Dobrilova, lies in their dream of independence and adventure.

“In America, Bulgarian students see a totally different world. They acquire important work habits and broaden their outlook. Most students who have participated once or more times in WAT programs come back motivated to achieve success in different fields. Others return eager to change their major or to enroll in a Master’s program in Bulgaria or abroad. There are more and more Orange clients who are interested in studying abroad,” she said.

It is a well-known fact that the United States has always been a pipedream for many Bulgarians, especially when times get tough. They like to complain about the government, salaries, perishing culture and what not. They believe that crossing the ocean and setting foot on American land would somehow magically make their dreams come true.

It is very unlikely that this happens though. Because no country would praise lazy people, especially the United States. You have to sweat a lot to get what you want. And programs like Work and Travel provide probably the best way of showing young people that they first have to work hard to be able to travel and enjoy the adventure later.