President of New Bulgarian School in Philadelphia Valeriya Gospodinov: Bulgarian Self-awareness Is Our Only Reward 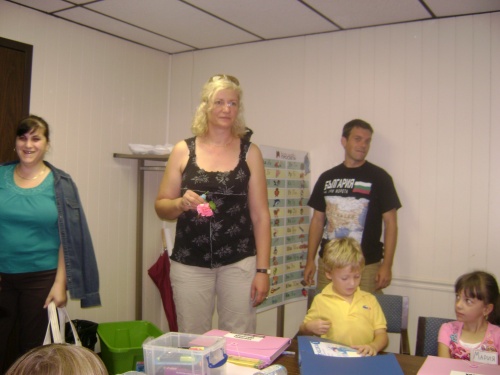 Interview with Valeriya Gospodinov, a Bulgarian living in US, known by many as the pillar of the Bulgarian community in Philadelphia.

A year earlier she was filmed by the "Other Bulgaria" TV show helping Bulgarian newcomers to get accustomed to their life in America.

For nine years now, along with organizing the Bulgarian community in Philadelphia and tending two Bulgarian/European grocery stores, Valeryia is the Head Rowing Coach at Haverford College in Philadelphia and recently started coaching the Radnor High School Boys Rowing Team.

Valeriya was also the moving force behind the petition that finally brought just a day ago, the Bulgarian national flag alongside many others on Ben Franklin Parkway in Philadelphia. She was the one distributing the petition and making numerous phone calls to Bulgarians in the area to ask them to sing it.

Novinite.com first interviewed Valeryia in the summer of 2009, after the general elections, since she was the organizer of the Bulgarian polling section in Philadelphia.

More about Valeryia, her decision to move to America, her life and work in Philadelphia can be found HERE.

Valeryia, anything new around you since we last spoke in the summer of 2009?

Hi Maria, I am so pleased that Novinite.com shows lasting interest in Bulgarians living in Philadelphia.

Oh, yes there are many new things here, both good and bad, you know, life is like a river, it changes and it runs; no one can stop it.

We are pleased to announce the recent publishing of the book "Communism Versus Democracy: Bulgaria 1944 to 1997," written by prominent Bulgarian author and political journalist, Nassya Kralevska-Owens, who lives right here, in Philadelphia. This book, whose original title in Bulgarian is "Bez Zaglavie: Rushiteli i Stroiteli na Balgaria" (Untitled: Destroyers and Builders of Bulgaria) has several editions in Bulgarian and now it is also published in English, and will be studied in US colleges with Political Science Schools.

The exhibit Book Illustrations from Bulgaria, organized by Alexi Natchev, Illustration Area Coordinator with the Delaware College of Art and Design (http://www.alexinatchev.com/bio.html) opened on November 5 in Delaware.

Just this past Sunday, the exhibit "Ancient meets Modern," was opened, giving residents and visitors in the area the opportunity to see a magnificent display of Eastern European Icons, created by Kras Gorin - Bulgarian artist and son of the prominent painter and sculptor Boris Gorinov. (http://www.krasgorin.com/)

These are all Bulgarians, who live and create in the US, and give us so much joy with their work and masterpieces.

We also hold festivals of the Bulgarian cinema and watch Bulgarian movies with much pleasure. Kalin Penchev, owner of Malincho International in New Jersey often organizes concerts of Bulgarian pop and folk performers, so we can enjoy live music as well.

And some really wonderful news – the Bulgarian flag is finally proudly waiving alongside many others on Ben Franklin Parkway in Philadelphia. What a great gift, just in time for Thanksgiving!

And on a personal level – what is new?

Exiting things happened to me - I also became the rowing coach for the Radnor High School Boys Crew, and we are wining many medals.

On November 14, my 8+ crew, my newest competitors, who learned how to row in the course of just several months, won a gold medal. My best crew – Varsity4+ - ranked 5th last year at the national competition while this season they were first, second and fifth with a difference of one second from other crews.

We are now working towards a stable first ranking in the spring. We will have very intense training sessions with weight lifting and erg rowing. These boys are exceptional athletes. As you can tell, I am very excited about my work with this crew. I am very proud of them.

Is there a true Bulgarian community in Philadelphia?

Yes, there are not that many of us, but we are well organized, I believe. We celebrate all Bulgarian holidays; we follow what happens in our homeland; we never forget where we came from, and we can only hope Bulgaria will not forget us.

Since Philadelphia is close to two State-boundaries – New Jersey and Delaware, Bulgarians from there join us as well. It is a short trip; we are the center of a triangle between three States and the news of all events, related to Bulgaria, spread out quickly.

What are the main activities that bring Bulgarians together? What is your role?

As I said – Bulgarian holidays; you know Bulgarians, no matter where they are, love to eat, drink, entertain and talk to friends. My husband Slavi and I have a store, and we have set a Bulgarian club underneath it – with a huge Bulgarian flag, a constantly growing library with books in Bulgarian – we receive book donations from people, who bring them to us, elated they can share them with others. In this club we celebrate March 3, Easter, Christmas and other holidays. My role is not that great; I just offer the space, and since there aren't that many of us – the club is the ideal gathering place. Everyone brings a homemade meal, and to tell you the truth, the table is always unique, the dishes are always different without even coordinating much in advance – you name it - cakes, appetizers, the traditional Bulgarian dishes such as banitsa (fillo dough cheese pastry); I bring some meze from the store, as far as rakya and wine, this is self-understood.

As I understand, due mostly to you effort, a Bulgarian school just opened in Philadelphia. Tell us more.

This is our biggest joy. This is not only my merit. We all realized a long-time dream. With the effort of four people -  Maria Papzova, Financial Manager; Desislava Karamfilova, Principal and Teacher Support on voluntary basis, myself as President, and last, but not least, actually, the most important person, Krasimir Iliev - he was not only very active in organizing everything; he purchased all books, notebooks, and donated money so that we could have a start.

We rent a room in a local library and every Saturday children study their native language. We use the books used in Bulgarian Schools. The teacher is Nina Valova. She has a major in Child Pedagogy from Bulgaria and 12 years of experience as a teacher. Nina lives in Delaware and travels quite a distance. We also have children who travel from far away to attend these classes.

We are already looking forward to next year, when we will have two grade levels – first and second. Currently, we are preparing a Christmas concert for parents.

We are all volunteers. We do not expect anything else, but for our children to know the language and culture of Bulgaria. Bulgarian and Bulgarian-American children study their native language in the new Bulgarian school in Philadelphia. Photo by Valeriya Gospodinov

What are the main problems faced by the school?

Everything is running smoothly for now. We have 12 students in grade 1. Some are older than regular first graders, but we enrolled them because they are mostly from mixed marriages and did not speak the language.

We missed the Education Ministry's deadline to submit the second project, so we did not get any funding from the Bulgarian State, but, as I said, we were able to open the school on time with Iliev's help and the parents' assistance.

Allow me to say here that everyone, who wishes to help, is welcome. We accept donations. Please email us at info@bgschoolphiladelphia.com

Is the school a member of the Association of Bulgarian Schools Abroad?

We fully support the Association; we are in touch with them; we have applied and are waiting for a response.

Since we last spoke, were you able to find a Bulgarian priest in the area?

No, regretfully, we do not yet have a priest. The project for a Bulgarian church belongs to the future. We are not that many here in order to apply for Bulgarian State assistance. But, look, we had a dream to have a school, and we made it. The same will happen with the church. I am a believer.

What is in the future for Valeriya and the Bulgarian community in Philadelphia?

The only thing I want Bulgarians to know is that there is one of them, all over the world, who is active. I hope our community will grow and organize even larger events dedicated to Bulgarian heritage.

My bigger wish is for our children to know and remember our language and culture; for Bulgarians to never forget where they came from; and most of all – to help each other as good Christians.