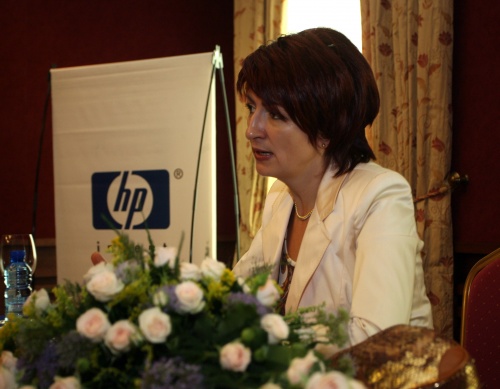 Sasha Bezuhanova has a degree in Electrical Engineering from the Technical University in Sofia. She started her career at Hewlett-Packard in 1994 as a manager in the "Computer systems" section at S&T Bulgaria - authorized distributor and service centre of Hewlett Packard for Bulgaria. In November 1995 she was appointed Director General of S&T Bulgaria.

Milena Hristova talked to Sasha Bezuhanova about HP expansion in Bulgaria, Bulgaria's potential as a country, to which services are outsourced and off-shored and the government's policy.

At a joint press conference with the Prime Minister of Bulgaria recently it was announced that HP is planning to create 2,000 new jobs in Bulgaria with the construction of a new development and support center. Why did the US computer giant pick Bulgaria for this center?

Today HP employs about 3000 people in Bulgaria. We are satisfied with the quality of skills and the performance of the team. That history of success and reputation of the site in a combination of the facilitating partnership of the government was the reason Bulgaria to be selected for building the new center.

You are responsible for the business of Hewlett-Packard in 27 countries from Central and Eastern Europe. What are Bulgaria's advantages as a country, to which services are outsourced and off-shored?

Bulgaria has very competitive microeconomic and financial framework today. There are skilled young specialists with good professional and language skills. I see Bulgaria among the best possible European sites for near-shore services.

How do you assess the performance of HP units in Bulgaria in comparison with similar structures in the other countries?

HP is a global company. The organizational and delivery concept is also multinational. Bulgaria plays an important role as part of that eco system. The final product can be successful when all components have good quality results – we equip our teams everywhere in the world with qualification, trainings, processes that allow the final result to be satisfactory for the market standards.

Is the global crisis a chance for the further development of the high-tech sector and countries like Bulgaria? Which are the conditions, which will help this to happen?

I firmly believe that the economic crisis stimulates innovative methods in business management including outsourcing, consolidation of resources, implementation of high tech and energy efficient technologies. The countries that have skills and high tech capacity will benefit most from that trend and will enjoy higher investments and engagement in the world corporate and scientific production.

What changes did outsourcing to countries like Bulgaria go though since the start of the economic crisis?

There is a trend to outsourcing, which was stimulated by the crisis. The countries that can host outsourcing operations see more high profile jobs as well as transfer of top class industrial and organizational know-how. This not only serves as a bridge for the country in a complex economic environment but also secures the sustainability of the labor market and elevates the country reputation as investment destination.

Will Bulgaria remain a preferred European market for outsourcing and off-shoring services?

This depends on the governmental program to sustain the competitive position of the country and also on the quality of the Bulgarian education system. The outsourcing, not only of IT services, is the biggest investment potential area today and for the next 5 years. If Bulgaria wants to be a major player in the European and world outsourcing the government in partnership with the business and educational institutions should drive a proactive program for building capacity, creating the supportive infrastructure, phrasing stimulating legislation, marketing Bulgaria as outsource destination.

Are there gaps or weaknesses in Bulgaria's legislation, which hamper your work?

Today's investment legislation in Bulgaria targets primarily investments in production, doesn't give special stimulus for high profile jobs creation. This should be corrected if the country wants to attract first class investors in the knowledge economy field.

You said once that foreign companies will come to Bulgaria because of the low-paid work force, but will stay because of the brain potential. Did you prove to be a good prophet?

I still support that understanding. Bulgaria did join the world investment competition with the profile of a low cost country. This attracted the short term production and low profile services investments. Those will be leaving the country to the next low cost site in a few years. If corporations realize that the country where they have set up business has skills and potential for more advanced production or services they choose to stay and expand on the ground – that's where Bulgaria has good chances. There are good examples in that respect. The expansion of HP operations here is also a proof that we see here the brain potential and skills.

Do you experience recruiting difficulties in Bulgaria? What guidelines do you follow to successfully manage HP employers in Bulgaria?

There is a shortage of specialists for some highly specialized IT jobs. This requests additional investment in qualification costing time and funds. We are sponsoring educational programs in 3 Bulgarian universities that contribute to increasing the general IT literacy on the market. It may be practical that a consultative body is structured, inviting leading IT corporations to consult the curriculum of the universities so that specialists come out of the educational system with practical and competitive skills.