AUBG Professor Phelps Hawkins: I Want to Come 'Home' to Bulgaria Every Year 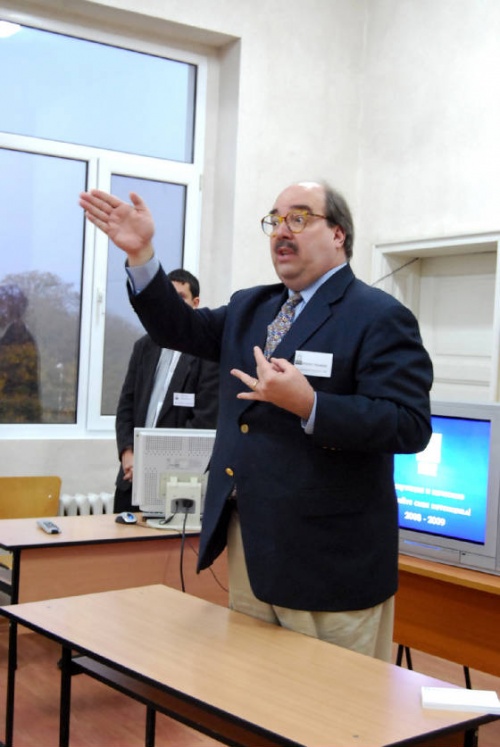 Phelps Hawkins has more than 40 years of experience as a journalist, executive and manager in all facets of television news, production and marketing, with a particular emphasis on international news.

He has reported in 16 countries and has served as foreign editor for NBC News. A common theme running through many of his international projects is the need for Americans to understand other cultures and their citizens, thus becoming true citizens fo the world themselves.

Hawkins has been teaching Journalism and Mass Communications at AUBG since 2007.

Tell us about your time in Bulgaria. When and how did you decide to come here?

It's been a wonderful and fascinating experience.  We actually intended to just come for a year - for the adventure of it - but have now stayed almost four years.  We just love the students; how can you beat the two-way learning experience of teaching the best and the brightest from some 40 countries?!

I had sent out a few queries to overseas English-speaking universities, building on my years as a foreign editor, producer and correspondent for NBC News.  I had also done some media consulting for the American University in Kyrgyzstan.  When AUBG called mid-summer 2007, saying they were looking for a last-minute hire for another professor who had backed out, I asked if they would also give my wife an adjunct teaching position.  They said yes, and so did we.  Seven weeks later, we arrived in Bulgaria.

What were your first impressions of Bulgaria and its citizens and did they change over time?

I have to say, that drive from the Sofia airport to route E79 heading to Blagoevgrad was not ... uplifting.  And when we finally arrived in Blago - in the dark, tired, having left much of our life in storage in New Jersey - to learn that AUBG had not arranged a hotel for us, but was unloading us in an absolutely filthy apartment in a concrete, 10-story apartment building with graffiti all over it ... it was not a singularly happy time in our marriage.

The good news is it has been, sometimes dramatically, mostly an uphill experience since then.  We have come to really enjoy Blago, its casual atmosphere, its walkability, its vitality with all the students and young couple around.  I have even thought each year of coming "home" to Bulgaria.

What is your favorite place/city in Bulgaria?

We've liked several, but probably Rousse is our favorite.  The wonderful old Hotel Splendide there is charming, and the short walk from the town square over to the Danube is easy and always rewarded by the views.  The Old Town of Plovdiv was also very interesting, and I think we would have enjoyed exploring more of the Black Sea beyond Varna if we had the time.

You are currently working as a professor at AUBG. How would you compare the university to other American universities in the United States? Do you think there are some major differences between them?

In many ways, I think AUBG compares quite favorably to many smaller colleges in the U.S.  I was teaching at one in Philadelphia before coming here.  Its major strengths - its incredible diversity, its residential community, its American style of teaching, and as a liberal arts institution - make it decidedly unique in this part of the world.

Students here have a remarkable opportunity to learn not just in the classroom but also in the resident halls, where the languages heard change simply by walking down a hallway.  There are also a number of exciting exchange programs with institutions throughout Europe and in the United States, which I believe can change a student's life.

Of course, there are some big differences between American campuses and AUBG, as frankly there should be.  The commitment to liberal arts, for example, at AUBG is not comparable to a U.S. college, apparently because the demand for Business classes is so high.  The technological support is not as good, mainly because the Bulgarian infrastructure is still weak.  But there is little question that students emerge from AUBG very well prepared to be successful in an increasingly complex and interdependent world.

You have more than 40 years of experience as a journalist and you have seen some major changes in the media environment. What is your opinion about the new social media, like Facebook, Twitter, etc? How have they affected the news today?

Sure they have.  Many journalists use Twitter, at the highest levels of the profession.  And social media like Facebook, along with the new phones, facilitate vastly increased communication.  I know much more than I need to know about my students courtesy of Facebook, and our awareness of our 23-year-old son's activities and thoughts is much increased over irregular phone calls.

The substance and quality of that communication, especially in the news, is another matter. The emphasis on bulk and speed in information, without judgment and context, is not helping us much.  And the increasingly overriding concern for profit is damaging us all.  But that's not due to social media.  As renowned journalist Edward R. Murrow told his TV audience in the 1950's, borrowing from Shakespeare, "The fault, dear Brutus, is not in our stars, but in ourselves."

In your opinion, has journalism changed for better or worse over the years?

Oh, on balance, for the worse.  We used to say in the 1970's that the worst thing to happen to broadcast journalism came when it started to make money.  Before, it was something a station was required to provide in the public interest, in return for having the use of the broadcast airwaves.

I still believe that the notion of the "public airwaves" was pure democratic genius in the early 20th century.  I think I would prefer to see news as a non-profit endeavor.  But even such world-class services as the BBC are under enormous profit pressures.  It's very sad.

What are you looking forward to in 2011?

Well, with an element of sadness, we're looking toward wrapping up our time in Bulgaria and at AUBG in May, after the current academic year.  But we've gotten a pretty significant reworking of our JMC curriculum in place, and we have a very exciting lineup of courses set for the Spring semester.  And we will leave with a long list of wonderful experiences from our four years living in Bulgaria, and many friendships with residents, colleagues, and students.