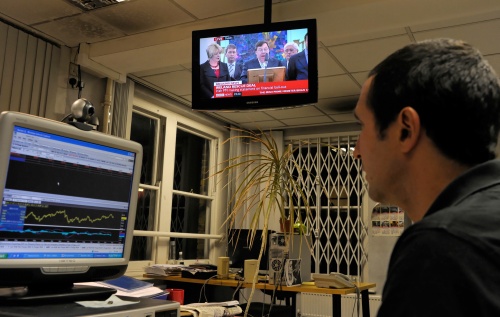 Irish Prime Minister Brian Cowen has shrugged off calls for early elections, saying the 2011 budget must first be passed and the details of an international bailout package thrashed out.

"I'm saying that it is imperative for this country that the budget is passed," Cowen said at a news conference Monday evening in Dublin. "I'm also saying that it is highly important in the interests of political stability that that happens. It's very important for people to understand that any further delay in this matter in fact weakens this country's position."

Earlier Monday, the Green Party, one of several parties in Ireland's coalition government, called for new elections amid controversy after the European and IMF officials agreed to help bail out the country with loans to tackle its banking and budget crisis, stabilize financial markets and prevent loss of confidence in other euro zone members, notably Portugal and Spain.

"This past week has been a traumatic one for the Irish electorate. People feel misled and betrayed," Green leader John Gormley said in a statement.

The party has said that its involvement in the government would go on "as long as it was for the benefit of the Irish people," but added, "We have now reached a point where the Irish people need political certainty to take them beyond the coming two months."

"So we believe it is time to fix a date for a general election in the second half of January 2011," it said.

Irish PM Brian Cowen said that the government would be publishing a four-year budget plan that would restructure the banking industry and banks will be made smaller.

The global financial crisis has dealt the Irish Republic a hard blow. The government has responded with deep spending cuts and costly bail-outs of the banking sector.