Rising Hollywood Star Nina Dobrev: I Am Proud of Being Bulgarian 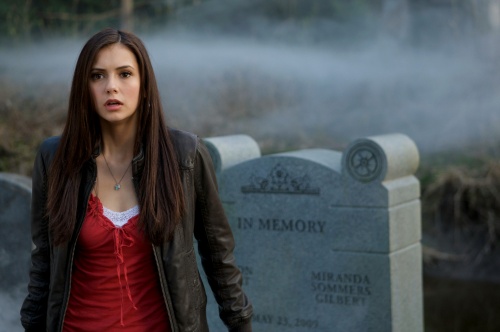 Nina Dobrev is the reason why Bulgarians can finally say they made it to Hollywood. Only 21-year-old, she has already gained international acclaim thanks to her role as Elena Gilbert in the popular American TV show “The Vampire Diaries,” which is already in its second season.

Nina was born in Sofia but moved with her parents to Canada at the age of two. In Toronto, Ontario she had the chance to develop her passion and talent for arts.

She took lessons in dance, gymnastics, theater, music and visual arts. It was her modeling job, however, that led her to commercials, which then turned into auditions.

“Too Young to Marry” was the movie that first introduced Nina to the Bulgarian audience. In the United States she became popular for her role as Mia Jones, a teenage mother on the TV show “Degressi: The Next Generation.”

Her big break came in 2009 with “The Vampire Diaries,” where she plays the role of a young girl, torn between two vampire brothers. In the second season of the show, she will also star as the Bulgarian-native Katherine Pierce, a vampire from the brothers’ past.

Having starred in 20 American and Canadian films and TV shows altogether, Nina has become one of the fastest-rising stars of Hollywood.

In her interview, Nina has shared her plans and hopes for the future as well as her memories and favorite things to do in Bulgaria.

This might be a clich? question – but what does it feel like to be a young Hollywood star? What did you think and feel when you made your first breakthrough in the cinema?

Becoming a working actress is very gratifying. It is also a long process; it didn’t just happen over night. A lot of training and hard work – but its been a great journey and I’m in a place now were I feel confident in my work. I’m constantly challenged and very happy.

You've been Mia Jones (Degrassi: The Next Generation) and Elena Gilbert (The Vampire Diaries), among a number of other roles. How do you go about portraying your characters? Are their personalities similar to yours, or do you have enter roles that are very different from you?

I’ve played many different people and personalities – every single role is different. Every role teaches me something new about my self, and of coarse there will always be a little bit of me in every character I portray.

What is it that you have gotten from your acting experience so far; how have you benefited from it as an actor? For example, was there something particularly special for you with respect to The Vampire Diaries?

In The Vampire Diaries I have the unique opportunity to play two characters that are so completely different from one another. This is a rare and special opportunity and I am extremely lucky to play two great characters on an amazing TV show. It is a challenge every single day, but I love challenges so it’s a good thing!

As somebody who is still rather young, how do you hope your career will develop? What are the goals that you are striving to achieve?

I strive to continue to have high expectations for my work, better myself and continue to look for challenging roles and make great film and television. I want to dip my finger into many cakes, I would love to transition into Film – and do different genres; romantic comedy, drama, action etc.

You did quit college in order to pursue your acting career. How hard was to take this decision? What were your grounds for it?

I went to University and continued to work as an actress for a while, but when the roles got bigger and opportunities for movies kept coming I had to make a decision.

In order to be very successful in anything you have to give it your full attention and effort. I was trying to juggle two things, and they were both suffering.

So I decided to take this rare opportunity that I had, this passion of mine and pursue it. I am very confident in my decision, very happy that I chose to feed my artistic side. I continue to read and study privately, but that is something I will always do.

I don’t think I will ever stop learning, until the last day of my life I will constantly be trying to expand on my knowledge and education. And University will still be there for me, I can go back and finish when the time is right! But at this moment in time, I feel I am doing the right thing for me.

Your family emigrated to Canada when you were very young. What is your image of Bulgaria? What does it mean for you? How often do you come to Bulgaria? Do you have family there? Do you have a favorite place or a favorite thing that you do in Bulgaria?

I moved to Canada at a very early age, but growing up I would come back to Bulgaria often (summers, Christmas etc). In the past few years since I came into the film industry and I have been working consistently, it has been difficult to come back as often as I would like to.

I spent this past Christmas in Bulgaria in Sofia and in the mountains snowboarding. I have a lot of family that still lives there so I try to visit as much as I can – its hard when you live so far away from your family. I miss them a lot.

My favorite place/thing is to go to the Black Sea, but I’ve been working over the past few summers so I haven’t been in years!!!

What do you tell your friends about Bulgaria? Do you feel proud of your Bulgarian roots, and why?

Everyone who knows me knows I am Bulgarian and that I am proud of it! I speak Bulgarian with my family, and when my friends hear it they say – “wow that’s so cool that you speak another language! Sounds so cool”.