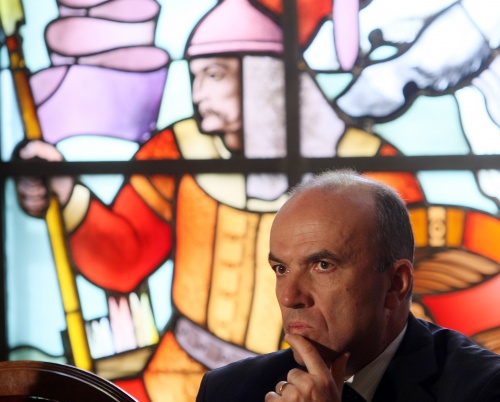 Nikolay Milkov is a graduate of the School of International Relations at the University for National and World Economy in Sofia. He has done post-graduate work in the area of international relations. Before joining Bulgaria's diplomatic corps, Milkov held several positions at the Defense Ministry such as cabinet adviser for the defense minister on international relations, and person in charge of external politics analysis with the Intelligence Department of the Army Headquarters, among others. At the Ministry of Foreign Affairs he has worked as head of the "Coordination and Planning" Directorate, and deputy foreign minister.

Milkov has served as Ambassador to Romania and Consul General in New York. Since April 2010, he is the permanent defense secretary with the Defense Ministry.

Is a diplomatic appointment in the USA the top "dream" of a career diplomat?

As a principle, a diplomat cannot be biased about the countries he is accredited to. There are important challenges all over the world, related to building bridges with the said countries, protecting Bulgarian national interests and the interests and rights of Bulgarian citizens. Regardless of this, however, diplomatic work in the US is a valuable and specific experience; it created opportunities for professional growth and development; for establishing numerous contacts.

What does the work of a Consul General involve?

The work of the Consulates is related mostly to administrative services for Bulgarian citizens and support in organizing Bulgarian communities in the respective Consulate region.

In a city such as New York, however, the possibilities are much greater. For example, taking into account the size of the city and the richness of local traditions, the General Consulate initiatives in the culture sector have the potential to turn into powerful campaigns, promoting Bulgaria.

New York is the financial capital of the world and the Consulate General has to present information about the leading trends in the financial sector. In the conditions of a global financial crisis, timely analysis on this topic can be extremely valuable. Organizing business forums and maintaining contacts with international companies, based in New York and Boston, relates directly to their interest towards Bulgaria's economy.

New York is the headquarters of many NGOs as well, working in the area of international relations and handling of crisis situations, and if their solutions are accepted, they are included in the analysis of institutes, and then used by politicians, who make the decisions in Washington DC.

New York is the center of the largest American-Jewish organizations, having huge influence on US politics and public live. Over historical facts and ties, these Jewish organizations are very fond of Bulgaria and have the potential to become real lobbies in informing the American society about Bulgaria and in promoting our national goals in the US.

And what services do the Consulate Offices provide?

The Consulate General in New York provides the full range of services a Bulgarian Consulate can offer, according to the legal basis governing this matter. The most frequent services are the issuing of visas to foreigners, issuing and renewal of Bulgarian passports, certification and notarization of documents, applications for Bulgarian citizenship. More can be found on the official site of the Consulate at www.consulbulgaria-ny.org

You know there are plenty, often valid complaints from Bulgarians abroad about inconvenient hours, quality of services, fees. Did you receive such complaints in NYC?

In order to avoid such undesirable reactions from our "clients," as soon as my term began, I introduce some innovations. I researched how, without violating American laws, we can install a tape recorder at the service counter. Recording and videotaping conversations is a frequent practice in American institutions, of course, with warning customers in advance. I asked from the Bulgarian Foreign Ministry, and was granted permission since such measure does not violate Bulgarian laws. We placed a sign at the service counter, warning conversations are being taped. We purchased a very inexpensive recording device and introduced the new practice. It had very disciplining effect on both sides of the counter and mutual complaints of rude behaviors or of overlooking duties stopped. The recorded conversations were also used to analyze more complicated cases when in order to make a decision we had to restore the complete information presented by the customer.

As far as business hours, the Consulate Office had always operated not by the closing time, but until the last customer in the waiting room at that time was served. We have also served customers who arrived outside the business hours when it has been technologically feasible.

Any ideas on improving those services?

One idea, I submitted as an official proposal, but could not realize, was the possibility to send the applications for Bulgarian passports and the return of the passports to be done not only via diplomatic mail, but with one of the specialized courier businesses offering express services such as DHL or Federal Express. This would shorten drastically the time for issuing the passports, which is often crucial to the applicants over the need of visas and travel plans, Customers would be willing to pay the shipping fee in order to receive faster service. Of course, those, who did not want to do it, would have the option to wait for the deadline. This would also save plenty of resources to the Bulgarian State, now spent on diplomatic couriers travels. Regretfully, the idea did not materialize over the complex legal basis, depending on a number of various Bulgarian institutions.

The change in the rules to allow personal IDs to be sent through the mail would also offer the opportunity to send them to the recipients without them having to travel, sometimes, from far away (thousands of kilometers) to receive their ID papers in person. These rules have been implemented a long time ago in countries, whose administrative practices we assess as successful.

We have a Consular Offices at the Bulgarian Embassy in Washington DC and 3 Consulate Offices in the USA – NYC, Los Angelоs and Chicago, right? If I live in DC, but am on a trip to NYC, can I use the office there?

Bulgarian and foreign citizens can use any of the Consulate Offices in the US, regardless of their registered address. Over the particularities of the administrative process, however, the Consulate services must be completed at the same office where they were initiated. For example, if a Bulgarian citizen submits their application for a passport in New York, he or she must also receive it there. Regardless of this rule, we try to help our fellow-countrymen and women and in case they made a preliminary written request, we have sent the ready ID papers to other Consulate Offices.

Bulgarians in the USA are said to be spread too much all over the country, except maybe in Chicago? Is there a Bulgarian community in America, what do you think?

As a whole, Bulgarians in the US are relatively highly educated, maintain their ties with Bulgaria, and strive to be in touch with each other. The first particularity is that for now they try to get organized locally, where they reside. There isn't currently an organization to include the entire US territory. In this sense, there are many Bulgarian communities across America, but not one, united and organized Bulgarian community.

The other specific is that these communities are organized on some particular basis – cultural, educational, religious. There aren't any organizations founded on national or regional principle – able to approach local authorities in the name of all Bulgarians in a given region as a community. This is a hurdle for the dialogue with these local authorities and deprives out countrymen to use municipal, State and federal resources to carry out a number of programs that would be beneficial for the communities.

These specifics became evident when the Consulate General began negotiations with the New York City Hall to organize festivities in the occasion of our national holiday and the hoisting of the Bulgarian flag right on Broadway. The first year, the City Hall had serious reserves because they are willing, in the name of ethnic accord, to grant such opportunity to local communities, but not to foreign institutions as is in reality the Consulate General. Later we applied in the name of a Foundation, registered in the US and our request was granted. This was the beginning of the traditional celebration of March 3 on Broadway, gathering hundreds of Bulgarians, waiving the national flag and dancing the traditional "horo" on one of the most famous New York streets and a global attraction.

Because of all this, one of my most important tasks during my term in the US was the work to consolidate the Bulgarian communities, including creating an organization based on national criteria. This is the only way to endorse Bulgarians as a community in the country of their residence; this will make them more independent from the help of the Consulate General and the Bulgarian State and to become a real Diaspora and a Bulgarian lobby in the US. As J.F. Kennedy said: "Ask not what your country can do for you - ask what you can do for your country."

You received high praise from Bulgarians in Philadelphia last summer for helping them with setting a polling section for the 2009 general elections. Tell us a little bit more about that experience – Bulgarian elections in the USA?

The flawless election process is one of the most important tasks of our diplomatic representations abroad because it guarantees the voting rights of Bulgarian citizens. This was the Consulate General position when we undertook the organization of the general elections in 2009. This was also the first time when polling sections opened in Philadelphia and Nantucket. We were not able to send an employee of the Consulate to both sections on election day because all colleagues were already committed to other cities, and additional staff was not sent from Bulgaria in order to save on resources. The lack of experience in both places made us somewhat nervous and weeks before the elections we kept constantly in touch with local organizers – active representatives of the Bulgarian community. I was able to visit Nantucket in advance, in order to make sure everything was organized according to the requirements – ballot boxes, dark room, protocols, etc. In Philadelphia, however, they achieved everything on their own. I regret I was not able to meet in person these people, who sacrificed personal time and made every effort to guarantee their countrymen and women the right to take part in the decision about Bulgaria's future.