Bulgarian Yogurt Made in the USA - by Bulgarian Journalist Ivan Bakalov 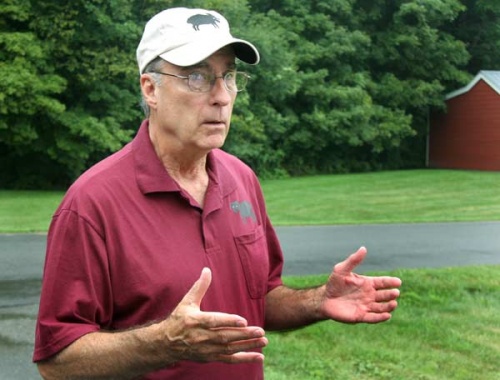 A chapter from the book of Bulgarian journalist, Ivan Bakalov, titled "At the End of Our Streets Are Spars," exclusively for Novinite's "International Survey: Bulgaria-USA.".

The book includes travel notes and black and white photographs from the journalist's summer 2009, 5500-kilometer car trip across America.

An interview with Ivan Bakalov about the book and Bulgarians' attitudes towards the US read HERE.

Bulgarian yogurt? We, Bulgarians, believe it is unique, the only one of its kind and people across the globe just make ersatzes – yogurt made with active cultures, but not the same as ours.

However, during my trip to the USA, my self-esteem as a Bulgarian, coming from a country with a unique product, started to hurt a little bit. I have already seen yogurt in France with labels "Bulgarian" or "Bulgarian Taste" and it was, indeed, very close to ours. But in America? It was unexpected. The first surprise came in Las Vegas, when I ate "Bulgarian Yogurt," made in Austin, Texas. (http://whitemountainfoods.com) Bulgarian yogurt made in Austin, Texas. Photo by Ivan Bakalov

It was sold in one-liter (not exactly a liter, more like 900 plus grams, according to American measurements) glass jars. The label said it was a high-quality product, which must be sold in glass packaging and that was it. It tasted exactly like the best quality yogurt on the Bulgarian market. Unbelievable, but true. It seems the Texan cows' performance is outstanding, (this is, after all, the State of cattle and cowboys), along with the active cultures imported from France (more about this follows below).

The second surprise was the sheep-milk yogurt made in a farm in New York State – Old Chatham." (http://www.blacksheepcheese.com) The price was quite steep – about 5 do 6 dollars for a container and it is sold mostly in organic food stores. This one does not say it is Bulgarian, but it tastes – well, as Bulgarian sheep-milk yogurt, the one you can have on Beklemeto for example and in remote mountain areas. In Bulgaria, all stores carry cow-milk yogurt, but the sheep-milk one is a rare find. And it is not always that good. Because of all this, the "Old Chatham" milk was a true surprise. American supermarkets have shelves after shelves, loaded with milk. The soy milk, right next to the regular one, is also in abundance. It tastes pretty much like milk. America is at war with fat and cholesterol. Total mania. Organic milk is more expensive. The yogurt shelves are even larger – with strawberries, blueberries, fruit, vanilla etc. But natural tasting yogurt is rarer. For example the "Danone" there is very similar to the Bulgarian "Danone," just slightly sweeter. Not because it has sugar added (those are a separate group), but, as it is my understanding, the sweeter taste comes from the milk.

How did it happen that Bulgarian yogurt started tasting as the French or the American one? The answer is quite simple – all Bulgarian manufacturers changed the yogurt's taste trough the active cultures in order to make it more non-perishable. The ratio between baccilus bulgaricus and other bacteria has changed. I have heart experts saying it used to vary from 3:1 to 1:3, now it has changed from 10:1 to 100:1 in favor of the other bacteria. So, the yogurt is less sour and less perishable. And it tastes similar to yogurt sold around the globe. Many Bulgarian yogurt-makers now sell products with a tiny percentage or without any live cultures in it.

One Saturday, our curiosity took us to the "Old Chatham" farm, about 100 miles from New York City. Again, lush green, small towns, houses scattered among trees. When we called in advance to make an appointment, one of the managers promised he will stay Saturday, especially for us – a journalist from Bulgaria was coming after all. Hard to believe. I was doubtful, but John Slotter, a 70-year-old man, was, indeed, waiting for us. Another working retiree. He came to the farm to be near his daughter, who also worked there.

First, he took us to some sort of office space with shelves proudly displaying a bunch of awards from different contests and exhibits. The majority were for the cheese. Then he took us to a shop, the place where milk is received. He explained how the milk is separated - for cheese or for yogurt. The farm has 600 acres, half woods, half meadows. 1 200 sheep are grazing them, 800 of them are milked. The awards for "Old Chatham" products. Photo by Ivan Bakalov

The production is not that large for American standards – 10 000 smaller containers per week (similar in size to ours in Bulgaria and some even smaller with fruit, blueberries, ginger), 2 400 larger ones – half-gallon, and 70 of one gallon each. The latter are sold to restaurants. The farm buys milk from other farms as well. The wholesale prices are 8.60 dollars for a gallon of sheep milk (about 3 leva per liter) and 1.50 dollars per liter of cow milk (0.5 leva per liter). John Scotter explained that 100 pounds (about 45 kg) yield 24 pounds of cheese (11 kg) or 94 pounds of yogurt (about 42 kg).

One must wear plastic covers on the feet and on the head in order to enter the shop. I only noticed two people inside, in aprons; the place was as clean as a science lab. We saw computers monitoring and managing the process. Scotter opened the refrigerator and showed us the active yogurt cultures, made by the Danish CHR Hansen company, shipped from France. The packaging said they contained baccilus bulgaricus. Inside the cheese shop. Photo by Ivan Bakalov

"We had visitors from former Yugoslavia and, exactly like you, they said – this yogurt is identical to the one back home. People also came from Argentina and told us the same," John Scotter explained. And, somehow, the illusion that there is yogurt only in Bulgaria, began to crumble...

The cheese-making technology is, however, French. The cheese is kept for a very short time in brine and then it is stored on shelves, in refrigerated rooms with strictly maintained humidity and temperature levels. After a certain period of time, the cheese loafs are manually moved from the upper to the lower shelves. It is not yellow cheese; it is white. Even though made through a French recipe, it is similar to the Bulgarian sheep feta cheese. There are other, separate refrigerated spaces for the blue cheese.

I have no idea what happiness actually is, but one of the possible answers is to live as a sheep on this farm. You are watched over like a small child. Sparkling clean, the barns are similar to the manger where Christ was born. And no one is yelling or cursing like in Bulgarian farms. Years ago, when writing a newspaper article, I had a long talk with the boss of then socialist meat company "Rodopa," Nikola Spasov, may he rest in peace. He was a joker, told me how when they took them to the Netherlands to look at farms, he was with a colleague when they noticed cows grazing freely. And the colleague said: "Watch, Spasov, watch, even these people's cattle have a different gaze." I remembered it when noticing the friendly eyes of the approaching sheep.

The milking facility has moving mangers, which come near the sheep while they eat, and behind them they place electric milking machines. Each machine is connected to a computer, each sheep has a name, and the computer registers the milk it gave, day after day. They use the data to select the top milk-producing sheep to be used for breeding. The lamb section is like a day care facility. Each has a number on its ear, and then it gets a name that is entered in the computer. By the way, when speaking about happiness – there is something even better than being a sheep on this farm – it is to be a ram. There are only 15 for 1 200 sheep. This must be heaven.

There is just one thing obstructing sheep happiness - the coyotes. In Bulgaria, dogs guard the herds. Here, there are no wolfs, but coyotes, and the herds are guarded by donkeys. "The donkeys scare the coyotes away. This is why each herd has 1-2 donkeys," John Scotter explained. I saw this with my own eyes – sheep were calmly laying in the meadow, and close by a donkey was peacefully grazing. It seemed somewhat strange how polite and cordial John Slotter was. He wasn't expecting anything back from me, some Bulgarian journalist will write something somewhere. Big deal. When we were getting ready to leave, he filled for us a large cardboard box with cheese and yogurt, certainly worth 150-200 dollars in retail prices. This kindness made us uneasy...

On the way back, I remembered one of the fathers of rock-and-roll, Chuck Berry. I once watched a documentary about him, where his sister said: "He is full of energy because when he was a kid my mother fed him Bulgarian yogurt." Jesus, Bulgarian yogurt in Saint Louis in the 20s and the 30s... This might be the only truly Bulgarian product. A God-sent gift. Bulgaria does not sell cars, computers, TV sets or aircraft to the world. But Bulgarian yogurt is valued here and there around the globe, and someone actually makes it...