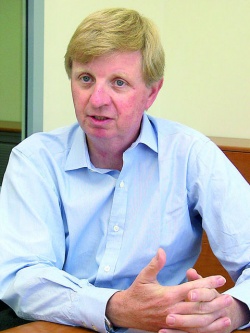 Julian Edwards joined Tishman International Companies some 22 years ago to head up their European operations. On behalf of the principals of Tishman International Companies and a Japanese client, he managed the acquisition of a blue chip office/ retail building let to the British Government for ? 145, million. Additionally, he acquired 15 buildings with a value in excess of ? 250 million, and has made a further ? 150 million of acquisitions.

He has developed approximately ? 200 million of property in the U.K. and Ireland, and managed in the region of 200,000 square meters of commercial and residential property. He was also involved in the formation of a $ 52 million Real Estate Fund in Europe and Scandinavia to invest in U.S. property.

Prior to joining Tishman International Companies, he worked for Land Securities PLC, one of Europe's largest quoted Property Companies where he was a manager of a ? 4 billion Central London Commercial and Residential Portfolio.

He is a Board member of Tishman's European entities.

Tishman International Group presented earlier this year the first commercial LEED-certified office building in Bulgaria, the newest Class A office building in the Sofia Airport Center (SAC). What are the advantages of the "Green Building" concept and the benefits of having a LEED certification?

One of the most obvious benefits to an occupier of a sustainable building is that of reduced utility, energy and water costs. In an era of increasing oil prices and consequently increases in energy prices, the benefit can be expected to increase. The less obvious but more important benefit is what studies are beginning to show - green buildings improve health and well being of the staff resulting in reduced sick days and increased productivity. The benefits of having LEED Certification are the marketability of property and corporate image of the property, being in a building, which has a longer life.

You were recently a moderator of a conference themed "Green Building–A Sustainable Path to Energy Efficiency and Economic Growth", which took place in Sofia and was organized by Tishman. What is Bulgaria's potential in this respect? How high should it aim in setting energy efficiency and sustainability standards in the construction sector?

It is my belief that due to Bulgaria being a new member of the EU and being one of the last countries to join the EU and thus being a country, which is lower down the curve than most, Bulgaria should aim high. It will be one of the selling points in order to attract both foreign investors and foreign employers to Bulgaria if the country has moderately high aims and adopts the EU energy efficiency code. Furthermore I feel that developers, contractors and architects in Bulgaria want to aim at the highest standards.

Can European regulations for energy efficiency of the buildings and the need for environmental-friendly construction works improve the image of the property sector and help it bottom out of the crisis?

As I have said in the previous question I believe that if Bulgaria can show that it is an attractive country for foreign direct investments and that it has a property sector where a number of buildings can be found that are energy efficient and sustainable, this should bring foreign companies to Bulgaria over some of its neighboring countries. Bulgaria can demonstrate that it has adopted high standards from the very outset, that even before regulations were put in place developers, architects and contractors were already building buildings that were energy efficient and sustainable.

Sofia Airport Centre, co-owned by Tishman International Companies and GE Real Estate for Central and Eastern Europe, apparently remains on track despite Bulgaria's deteriorating market conditions. How did you manage to achieve that?

Both Tishman International Companies and G.E are substantial knowledgeable companies. When we commenced the development of Sofia Airport Center we had clear plans that we felt were achievable. We had financing in place, which has been maintained, and we have continued to be focused on the job at hand and have not varied from our business plan and goals.

Which are the biggest advantages of the center, which represents one of the most significant investments in the real estate property sector in Sofia?

The biggest advantage of Sofia Airport Center is that it is a well designed business park with good quality buildings managed by Tishman International Management EOOD. When the development is built out, it will provide a quiet and calm business environment around a park and gardens with a lake as the focal point.

What are the companies, which approach you with inquiries?

We have been approached by a number of companies with interest to be occupiers of Sofia Airport Center. These inquiries have come from global companies, regional companies and Bulgarian companies. Some of them are now tenants of ours in our logistics center.

The construction of SAC is just one aspect of your company's involvement in Bulgaria's economic growth and real estate market. What activities do you have in Bulgaria besides that?

Tishman International Companies focus in Bulgaria is mainly upon Sofia Airport Center and another investment property, the TNT Headquarters. We currently do not have any other activities in Bulgaria. However we are looking at one or two potential investments, but these are in the very early stages.

Did the deteriorating economic climate force the company to temporarily abandon some of the investment projects in Bulgaria and Romania? Do you plan to re-launch them once the crisis passes?

The deteriorating economic climate has forced Tishman to stop looking at investment projects in both Bulgaria and Romania but as I said in the previous question, we are currently in the early stages of one or two potential investments.

Does the company consider other southeast European countries for investments?

We have not considered any other southeast European countries for investments other than Romania and Bulgaria.

What advantages and risks does Bulgaria hold for the foreign investors, especially in the real estate sector?

Bulgaria offers foreign direct investors a good stable country to work within, a good, well educated work force who are loyal and reliable. Furthermore the country has an attractive tax regime and is stable politically. The cost of construction is very similar to the neighboring countries and is a little lower than Western Europe. The risks in the Bulgarian real estate sector are no greater than those in the real estate sector of other parts of Europe.

How would you describe Bulgaria's location on the global map of real estate now? Is it entirely dependent on the foreign capital markets?

I feel that Bulgaria's location on the global real estate map has to be looked at in two segments. Residential property in Bulgaria has to overcome the great overbuild that took place especially around the Black Sea and this is well known. If one looks at other parts of Bulgaria the overbuilding is not as severe as around the Black Sea, with regards to the commercial vacancy sector where commercial rates are increasing. I do feel that absorption will be steady over the next few years as more and more companies especially in the outsourcing sector are seeing the advantages of Bulgaria. I think it is going to take a little longer before the real estate investment market in Bulgaria improves, but this is very much because there are more investment opportunities available at the moment in western Europe and a number of the American & European investors would prefer to invest in those markets than to be investing in the emerging markets like Bulgaria, where the additional risks are not truly reflected in yields.

What should the government do to make Bulgaria a more attractive market? What would it take to attract more companies like Tishman International to Bulgaria, i.e. more upmarket, high-profile investments?

I feel that the current government has made Bulgaria a more attractive market as they have given prospective foreign directors a more welcoming feeling and have through their Invest Bulgaria vehicle actively attracted major global companies to Bulgaria. Once they have visited Bulgaria for a few days they see the attractions of Bulgaria as a business destination and a good place to have offices / facilities.