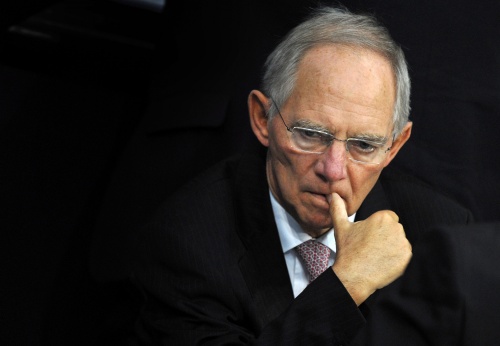 "If we now find the right answer to the Irish problem, then the chances are great that there will be no contagion effects," Wolfgang Schaeuble told ZDF television in Berlin. Photo by EPA/BGNES

German finance minister has sought to assuage contagion fears that Ireland's problems might spread to other euro zone members with large budget deficits.

"If we now find the right answer to the Irish problem, then the chances are great that there will be no contagion effects," Wolfgang Schaeuble told ZDF television in Berlin.

European and IMF officials agreed on Sunday to help bail out Ireland with loans to tackle its banking and budget crisis, stabilize financial markets and prevent loss of confidence in other euro zone members, notably Portugal and Spain.

Irish PM Brian Cowen said that the government would be publishing a four-year budget plan that would restructure the banking industry and banks will be made smaller.

The global financial crisis has dealt the Irish Republic a hard blow. The government has responded with deep spending cuts and costly bail-outs of the banking sector. Announcing the bail-out on Sunday, Prime Minister Cowen appealed for public solidarity.

Last week the cash-strapped country claimed it has shied away from asking for help, but a bail-out has been widely expected.

The Bulgarian deputy prime minister Simeon Djankov, who is also the country's finance minister, was the first to let the cat out of the bag on the date of an Irish bailout, telling Bulgarian reporters on Wednesday (17 November) that despite Irish insistence to the contrary, he expects a package will be cobbled together some time next week.

Once known as the Celtic Tiger for its strong economic growth - helped by low corporate tax rates - a property bubble burst, leaving the country's banks with huge liabilities and pushing up the cost of borrowing for them and the government.