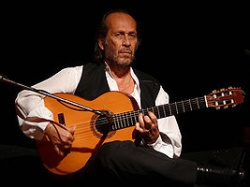 The famous guitar virtuoso is to perform in Sofia December 9 2010. Photo by Wikipedia

Paco de Lucia, the legendary flamenco musician, is to end his European tour with a concert in Bulgaria's capital December 9 2010.

Born with the name Francisco S?nchez G?mez in 1947, Paco de Lucia has been a devoted flamenco guitarist since a very early age.

Recognized as a guitar virtuoso all over the world, Paco de Lucia is a leading proponent of the Modern Flamenco style, and is one of the very few flamenco guitarists who has also successfully crossed over into other genres of music, including jazz, classical and world music.

Ever since 1965 when his first album entitled "Dos Guitarras Flamencas" came out, he has been an inspiring and admired musician worldwide.