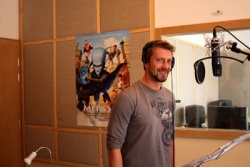 Bulgarian sex symbol Kalin Vrachanski will give his voice to an animated character, originally voiced-over by Brad Pitt. File photo

Bulgarian and Hollywood sex symbols, Kalin Vrachanski and Brad Pitt, will share a superhero in the new animated movie "Megamind".

Brad Pitt has given his voice to the superhero Metro Man in Dreamworks' "Megamind 3D," which was released November 5 in the United States.

A month later, for the Bulgarian premiere of the movie on December 17, Vrachanski will take over the voice of the animated character.

The movie is about a villain named Megamind, who finally conquers his nemesis, the hero Metro Man, but finds out that his life is pointless without a hero to fight.

Director of the movie is Tom McGrath, who also directed the animated hit movie "Madagascar."

This is not the first time that Kalin Vrachanski has given his voice to an animated character. The star from the hit Bulgarian TV show "Staklen Dom" (The Glass House) could also be heard in the Bulgarian voice over of "Tangled."