Owners of Illegal Residential Buildings in Sofia to Face Penalties 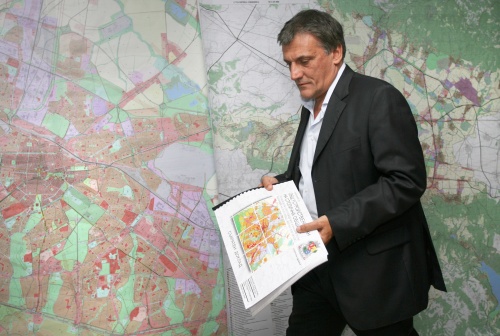 Sofia's Chief Architect, Petar Dikov, has announced that there are about 2000 illegal residential building in four districts of the city. Photo by BGNES

More than 2000 residential buildings in the Bulgarian capital are illegally occupied because they have not been registered in the city's land records, the Sofia Chief Architect, Petar Dikov, informed.

The illegal buildings have been found during the operation Helicopter by the Bulgarian National Revenue Agency, which mapped out luxury properties and mansions around the city through air surveillance in order to identify their owners and investigate their sources of wealth.

In Dikov's words, the 2000 buildings were found in the Sofia districts Pancharevo, Vitosha, Ovcha Kupel and Bankya. They were not only family houses, but also apartment blocks.

The architect said that the owners of all illegal buildings that have not paid taxes to the Sofia municipality will be penalized.

"The Sofia municipality will request the relevant interest on the taxes for the last five years. We might propose to introduce a fine for such occasions. It is very possible," Dikov said.

He has explained that the number of illegal company buildings is far smaller than the 5% unregistered family residential buildings. He added that the most difficult is the situation with apartment blocks that have not been registered in the land records.

"In these cases, we have many specified buyers and incorrect entrepreneurs. We should not evict someone who has bought an apartment, has given a lot of money, has moved in, only because the entrepreneur did not do his job and has not fixed the power, the power station and the street," Dikov said, adding that the buyers' culture in terms of legislation needs to improve.

Dikov has explained that the information system for all permits and other documents, issued by the Architecture and Urban Spatial Development Service since 2006, will be ready by the end of the year. In his words, the system will put all documents in order and they will be available as soon as they are requested, as they will be in electronic form.

In September and October, the Bulgarian tax authority started Operation Helicopter, which aimed at mapping luxury propoerties and mansions around the country.

In October, the tax agency said in a statement the good results, i.e. bringing a turnover of BGN 2 B out of the gray economy and extracting the respective VAT, was the result of the many tax inspections.