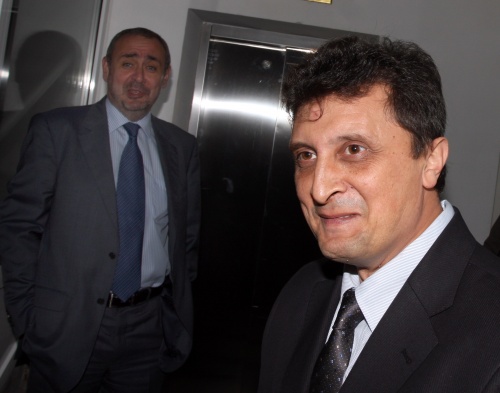 Georgi Kolev (right) has been approved as the new Chair of the Supreme Administrative Court; Chief Prosecutor Boris Velchev is seen in the background (left). Photo by BGNES

Kolev, who was the only nominee for the position anyway, got 19 out of 19 votes in the secret VSS ballot, even though three of the ballots were declared invalid.

The supreme magistrates held the vote Monday without any debates or competition for the position even though Bulgaria's judiciary is constantly slammed by international and Bulgarian factors, including PM Borisov and Interior Minister Tsvetanov.

Kolev's appointment has to be sealed with a decree of President Georgi Parvanov in order to become finalized.

According to various reports in the Bulgarian media, Kolev's bid has been problematic because his tax returns did not correspond to data from the state properties register.

Before the vote on Monday, the Bulgarian Audit Office stated that Kolev's properties will not be investigated immediately but that his real estate audit will be announced on December 15, 2010, when the Office will make public its reports on all major state officials.

According to the Ethics Commission of the VSS, the mistakes in Kolev's declaration are purely technical.

In his presentation of his priorities as the future Chair of the Supreme Administrative Court, the judge said the deepening of the reform in the judiciary is a "joint effort" of all state institutions. He said that the President's decree for his appointment must be awaited, and vowed to continue the good practices of the work of his predecessor, Konstantin Penchev, who was recently appointed as Bulgaria's Ombudsman.

Bulgaria's Supreme Administrative Court is the highest institution in the country in administrative justice. It has jurisdiction over suits against decrees of the Council of Ministers and government agencies, the Supreme Judicial Council, the Bulgarian National Bank, the District Governors, etc.

Kolev's platform provides for downsizing the jurisdiction of the court but placing the cases for dismissal of police, military officers, and senior civil servants in the competence of the Parliament.

Georgi Kolev is the present head of the Sofia City Court. The 44-year-old magistrate has graduated from the former Communist Interior Ministry College "Georgi Dimitrov." He began his career as an investigator, and in 1996 became prosecutor with the Sofia City Prosecutor's Office where he remained for 4 years; the last two as Deputy Chief Prosecutor.

In the last 10 years Kolev has worked as magistrate with the Sofia City Court, then as its Deputy Chair and Chair. He is described by colleagues as quiet and reserved, tending to avoid conflict, but he has tried several emblematic, high-profile cases, some of which have been closely monitored by the European Commission.

The magistrate sentenced the former Director of Sofia Heating Utility "Toplofikatsiya," Valentin Dimitrov to 14 years behind bars for embezzling BGN 6 M from the company and ordered his properties confiscated; he sentenced Mario Nikolov to 12 years of jail for the draining of EUR 7.5 M from the EU SAPARD program and to property confiscation; he tried the case against the former Head of the Road Agency, Veselin Georgiev, charged with assigning winning bids in public procurement procedures to companies owned by his brother; ordered the arrest of former Velingrad Mayor, Fidel Beev, after the later refused to appear in court, sentenced two employees of the Road Agency for bribery.

In his declaration, Kolev lists as possible conflict of interests being a member of the Board of the Sofia Hunting and Fishing Association and having a spouse, who works as a notary public.