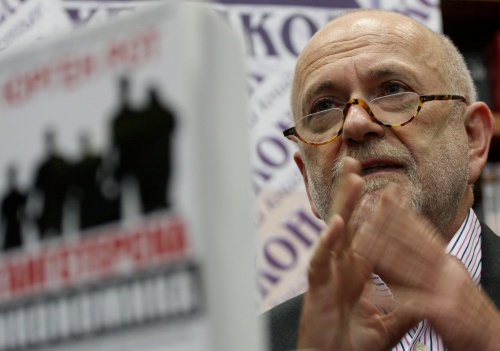 Jurgen Roth, who has so far steered clear of Bulgaria, presents in Sofia his new book “Gangster Economy.” Photo by BGNES

Roth, who is in the Bulgarian capital Sofia, presented Thursday the Bulgarian edition of his new book "Gangsterwirtschaft" ("Gangster Economy").

The journalist announced it was his lawyer who told him Petkov protected controversial and murky businessmen Aleksei Petrov and the so-called Galevi brothers. The information was revealed during one of the open court session's in the defamation trial filed by the former Interior Minister against Roth.

Roth further explained he had asked Prime Minister, Boyko Borisov, to launch a probe of the former Interior Minister, but was told members of previous cabinets had secured their immunity years ago and it would be very hard to sentence them.

The book includes 30 pages dedicated to Bulgaria and the influence of shady business organizations, particularly TIM, on the economy.

Roth pointed out international crime cannot be effectively countered by local authorities because the mafia acts globally, with the help of bankers, lawyers, and politicians.

During the visit he was also scheduled to confer with Bulgaria's Prime Minister Boyko Borisov.

Jurgen Roth has so far steered clear of Bulgaria, saying he fears for his life, but now claims to have the official assurance of Interior Minister Tsvetan Tsvetanov that his security is guaranteed.

"I have the official statement from your Minister of Interior Tsvetan Tsvetanov that he will secure my visit in Bulgaria. And I also hope that Mr. Rumen Petkov will not order gangsters to do what he said two years ago – to beat me on every part of my body," Jurgen Roth said in an exclusive interview for Novinite.com (Sofia News Agency).

Roth spoke to Novinite.com days after he was cleared of allegations of slander in his book about organized crime in Bulgaria, entitled "Bulgaria's New Demons", by Rumen Petkov.

According to Roth Bulgaria's Prime Minister Boyko Borisov is on the right track, but the old nomenklatura, which has remained potent after the fall of communism, will use every instrument, even murder, to stop these reforms.

"In this moment the situation for both Boyko Borisov and Interior Minister Tsvetan Tsvetanov is very dangerous, because the old nomenklatura and powerful economic crime managers will use every instrument, also killing, to stop these reforms," Jurgen Roth said in the interview.

Asked whether he believes in the promises of the current government to investigate alleged crimes of the previous government, Roth said:

"I hope so. Let's see what happens in the next months. I am optimistic that they will start in the near future. Otherwise it will end in a disaster."

According to Roth, if Borisov does not want to lose and disappoint the people who voted for him, he must start now - as a politician who knows well the economic and social abuses in the wonderful country Bulgaria.

"If he and his government turn out to be a failure, who could do this job? The old parties, which are discredited?"