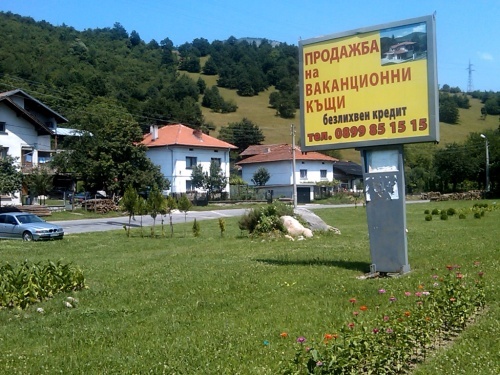 Real estate prices in Bulgaria dropped the most in Central in Eastern Europe in 2009. Photo by BGNES

Sofia is the capital with the biggest drop of real estate prices in Central and Eastern Europe for 2009, according to analysis of the consultant company ERA Europe.

Compared to 2008, last year the real estate prices in Sofia dropped by 22%, putting the Bulgarian capital at the top of the list for the region.

According to the analysis, compared to the whole Europe, Sofia ranks third, left behind only by Dublin and Lisbon, which registered a 26% and 24% drop of real estate prices in 2009.

Bulgaria's capital is followed by Bucharest, with a drop of 15%, and Luxembourg, Amsterdam, Prague, Paris and Athens, which had more moderate decreases of 5% to 10%.

Data showed that Bern was the only capital to register increase of the real estate prices in 2009 – 10%.

The countries that are the least affected by the recession are the Scandinavian countries, Switzerland and Turkey. The reasons are different in every country but there is a category that is valid for all of them and this is the lower consumer confidence and more sellers.

Together with the huge volume of information, available on the Internet, the real estate market is becoming more and more dependent on brokers, while their number continues to decrease, according to the analysis.

On a national level, Bulgaria ranks second in Europe on drop of real estate prices. Ireland holds the first place with its 20% decrease.

The prices went down 5-10% in Luxembourg, the Czech Republic, France, the Netherlands and Portugal.

In Bulgaria, the average price for real estate in 2009 was about 18% less than the previous year.

"Bulgaria is now among the top countries in drop of prices because it has been in the first places for growth of property prices for years," Teodora Dimitrova, Executive Director of ERA Bulgaria, said.

According to her, it is a good news that the prices in Bulgaria and in many other European countries are stabilizing because this would mean that that the perspectives for stabilizing of the market are also good.

"The danger, which lies in stable prices, is in the lack of compliance in sellers. They refuse to discuss the initially offered price, while buyers have their defined budgets, which are relatively low. This puts the market at the risk of stagnation, close to the one it faced at the beginning of the year when sellers did not want to believe that real estates are depreciated and buyers waited for the prices to drop more," Dimtirova said.

She added that she hoped the recession had sobered up both parties.