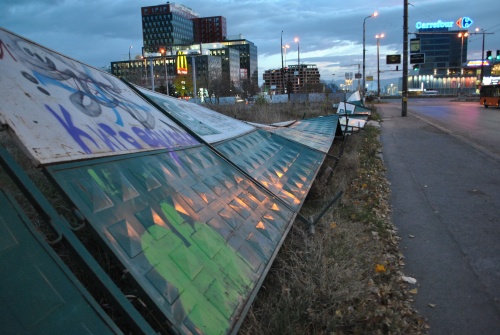 The strong wind has caused many fences to fall in Sofia and other parts of Bulgaria. Photo by BGNES

The strong wind, which has already blown for three consecutive days in Sofia and other parts of Bulgaria, continues to cause damage.

The continuing hurricane-like winds across Bulgaria have made the authorities declare Code Orange, the second strongest natural disaster danger level.

During the early hours of Wednesday, the Bulgarian Civil Defense has received more than 10 calls concerning fallen trees, branches and dangerously overhanging tin roofs Sofia. Four separate equips have been mobilized there to deal with the damages.

There have been no signals received about hurt people or grave material damage.

On Tuesday, the wind threw a constriction scaffold over trolley electric cables in Sofia, causing a significant traffic jam for hours. A large number of constructions site fences fell in the Bulgarian capital.

Other parts of the country also suffer from the hurricane-like winds. A total of 228 signals fallen trees, roofs, billboards and torn cables have been received by the Civil Defense during the last 24 hours across the country.

The strong wind is expected to cease Wednesday. Code Orange, however, is still active.