18 Bulgarian Companies Make It to Top 500 in CEE 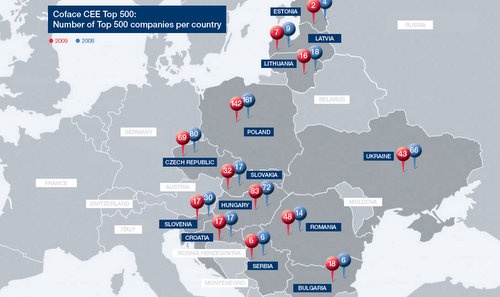 A total of 18 Bulgarian companies are ranked among the biggest 500 in Central and Eastern Europe, according to Coface's annual ranking.

The most highly ranked Bulgarian entry, the Bulgarian refinery of Russian oil company Lukoil Neftochim has come in 35th on the list of the 500 largest companies in the region. Lukoil Bulgaria, which trades in the refinery output, is ranked 55th.

The number of Bulgarian companies in the CEE Top 500 tripled from 6 to18, which advanced the country from 11th to 7th place in this category.

The number of employees in these companies was 116% higher than in 2008, which represents 11th place in the country comparison.

"The number of bankruptcies in Bulgaria rose by 29% from 2008 to 2009. The economy was negatively affected by a sharp drop in exports and imports as well as a decline in domestic demand. This downturn had a particularly strong impact on the automobile branch and industry in general,with a significant decrease in orders as the result. Foreign investments, which have played a particularly important role in Bulgaria to date, also declined substantially.

"In 2009 foreign direct investment fell by more than 50% in comparison with the previous year. As assistance in countering these developments, Bulgaria will receive EUR 30 million of funds from the European economic stimulus plan during 2009 und 2010. The situation in Bulgaria is serious, but the country can still rely on reserves from better years – since it was one of the few EU member states to record a budget surplus in the past. However, declining tax revenues andalready low tax rates will preclude further budget surpluses in the coming years.", the Coface report states.

Most of the companies on the prestigious list are in the fields of Energy and Resources and Manufacturing. Polish petroleum company PKN traditionally tops the overall list, while the second and third places are occupied by Hungarian oil and gas company Mol and Naftogaz Ukraine.

The full report of Coface is available HERE.