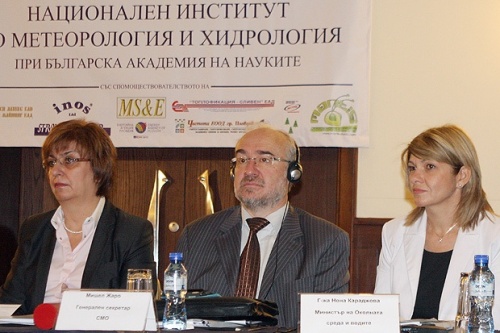 The Minister of Environment and Waters, Nona Karadzhova (R), at the celebration of the 150th anniversary of the first meteorology measurements in the country. Photo by Sofia Photo Agency

The Bulgarian Academy of Sciences (BAS) marked with a ceremony Monday the 150th anniversary of the first meteorology measurements in the country.

The other celebrated date is the 120th anniversary of the establishment of the Bulgarian meteorology Services, now National Institute for Meteorology and Hydrology (NIMH).

The Minister of Environment and Waters, Nona Karadzhova, who attended the event, vowed to not allow shortage of funds for the Institute, despite severe budget cuts for BAS, saying her Ministry has EU funds financing for it.

Karadzhova was firm the information provided by NIMH is valuable and needed and stressed the Institute is a key factor in flood and other natural disasters prevention, saving resources and human life.

NIMH Director, Georgi Kirchev, reiterated the importance of disaster prevention, saying there are such systems for flood prevention around the country and the regions around the rivers Tundzha and Maritsa. He announced development works for systems for Black Sea storms alert, nuclear disaster alert, and harmful air substances.

The Deputy Speaker of the Parliament, Ekaterina Mihaylova, wished NIHM more and many correct forecasts, pointing out people generally don't realize the amount of effort and work behind the several minutes of such weather forecasts.