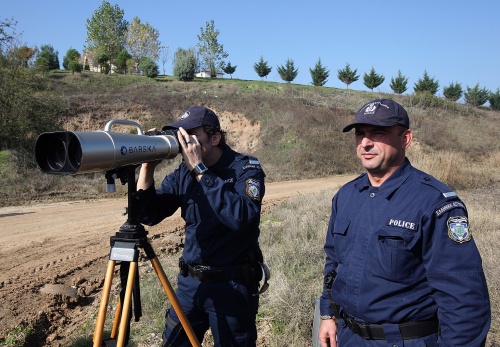 Greek police officers patrol near the northeastern city of Orestiada, at the Greek-Turkish borders, on 05 November 2010. A contingent of border police sent by Frontex arrived in Greece in order to assist efforts to stem the tide of illegal migrants. EPA/B

Police from across the EU have arrived in Greece to patrol its border with Turkey against illegal immigrants as part of the continued "Joint Operation Poseidon" of Frontex, EU's border control agency.

Police officers and equipment from Bulgaria, Germany, Romania, Austria, Hungary, Slovakia and Denmark will be deployed along the border with Turkey in Northeastern Greece, which is a major point of entry into the EU for illegal immigrants.

The mission is expected to last for two months and will focus on policing a previously unguarded 12-km section of a river border between the towns of Nea Vyssa and Orestiada, on the Maritsa River.

This is the first time a rapid-intervention border team has been deployed to an EU member state since the Frontex teams were created in 2007.

Frontex, the EU agency based in Warsaw, coordinating the operational cooperation between member states in the field of border security under the European Patrol Network project, has agreed to place 175 police officers from across the EU after last month Greece requested from it help to cope with the growing number of refugees from African countries, Iraq and Afghanistan penetrating through its river and land border with Turkey.

A surge in the number of illegal immigrants captured in Northeastern Greece is clearly underway, as only 9000 were busted in all of 2009, compared with 34 000 in the first nine months of 2010. The surge is seen to be the result of the closure of another route for illegal immigration from Libya to Italy. A recently made controversial bilateral agreement allows Italian patrol vessels to turn back at sea any boats transporting illegal migrants.

Bulgaria, which has a longer land border with Turkey than Greece, has not detected a substantial increase of illegal immigrants seeking to enter the EU even though the Bulgarian border police occasionally capture small groups of illegal migrants from the Middle East and Africa.

EU's Joint Operation Poseidon started in 2006 as a purely sea-based operation patrolling the coastal waters between Greece and Turkey. Since the beginning of 2010, Poseidon has also had a land-based component covering the Greek and Bulgarian land borders with Turkey — now confirmed as the dominant country of transit for irregular migration into the EU.