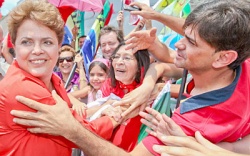 Under a headline "A Maiden from the Pirin Region Leads Brazil," the Skopje daily "Dnevnik" proclaims the new President of Brazil, Dilma Roussef is Macedonian. Photo www.dnevnik.com.mk

Under a headline "A Maiden from the Pirin Region Leads Brazil" the paper writes Rousseff's father, Petar Roussev was born in the town of Gabrovo, in the Pirin (Mountain) part of Macedonia. The article further informs that in 1929, Roussev, an activist of the then illegal Communist party, fled to France and several years later emigrated to Brazil, where he changed his name to Pedro Rousseff.

After the "revelations," the publication continues with a thorough biography of the new Brazilian President.

The article comes on the heels of several postings in the social network Facebook that Dilma is Macedonian.

Gabrovo is a city in central Bulgaria, while the Pirin Macedonia Region is on the border between the two countries, in southwestern Bulgaria.