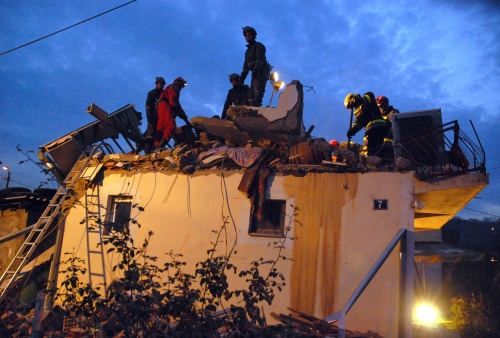 Rescue workers examine the collapsed roof of a building in Kraljevo, in central Serbia, 03 November 2010. A state of emergency was declared in the town after an early-morning earthquake on Wednesday that claimed two lives. Photo by EPA/BGNES

Two people were and some 50 were wounded in Serbia overnight as a result of a strong earthquake with an epicenter near Kraljevo, which was also felt in Sofia and Western Bulgaria.

The magnitude of the tremor varied between 5,3 and 5.6 according to various reports.

In Western Bulgaria and Sofia it was felt as a 3-4-magnitude earthquake, according to the National Seismology Center at the Bulgarian Academy of Sciences.

Eyewitnesses said buildings in Kraljevo, including the local hospital, were slightly damaged during the quake and some homes were without water and electricity.

According to them the town is littered with debris, while some older houses are destroyed completely. Half of the town have no phones, water and electricity.

Serbia's interior minister said that the two people who died were a couple, killed when the roof of their house collapsed.

Ivica Dacic said material damage to the town of 70,000 people was considerable and that rescue teams and police had already been deployed to the area.

Five aftershocks occurred between 3:13 and 3:52 am and another tremor struck shortly before 10 am.

Meanwhile a 2-magnitude earthquake occurred at roughly the same time 72 km north of Thessaloniki, on the territory of the Republic of Macedonia.

In a separate development an undersea earthquake with a magnitude of 5 on the Richter scale jolted the region of the northeastern Greek island Samothrace, and was also felt in European Turkey.

The quake hit at 4:51 am local time, about two hours after a 5.6-earthquake in central Serbia that claims 2 lives.

It had its epicenter 350 km northeast of Athens, the Institute of Geodynamics at the National Observatory of Athens said, which is about 500 km southwest of Sofia.

According to Greek seismologists, however, the two earthquakes are not related, and were a coincidence.

Greece is the European country with the most intensive seismic activity.