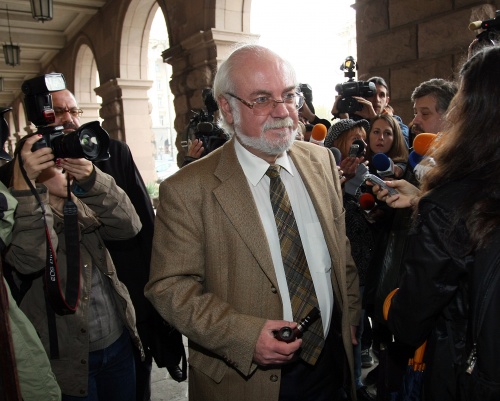 The leader of the "Podkrepa" (Support) trade union, Konstantin Trenchev, voiced satisfaction with the latest cabinet revamping of the retirement reform. Photo by BGNES

After long and heated debates, the Bulgarian cabinet, the trade unions and the business finally signed an agreement about the retirement reform, Prime Minister, Boyko Borisov, announced.

Borisov presented the agreement Monday before the Council of Ministers, saying all parties have been lastly satisfied with the plan. Deputy PM, and Finance Minister, Simeon Djankov, a strong opponent of delaying the increase of the required years of service and of retirement age, was not present at the press conference.

"I am content with the signing of this document," the leader of the "Podkrepa" (Support) trade union, Konstantin Trenchev, is quoted saying.

The head of the other major Bulgarian trade union, Confederation of Bulgarian Independent Syndicates, KNSB, Plamen Dimitrov, defined the reached agreement as a feasible and reasonable compromise.

In an interview for the TV channel Nova Televizia Sunday evening, Borisov read what he vowed to be the final plan of the cabinet for retirement reform. The now signed agreement is to be voted on Wednesday by the Council of Ministers.