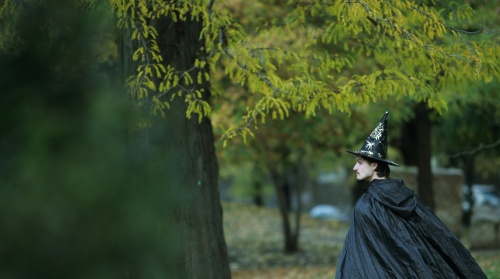 A masked man walks in the downtown Sofia park known as the "Doctors' Garden" where a Halloween fest is held Sunday. Photo by BGNES

Bulgarians are preparing to celebrate Sunday evening All Saints Day or Halloween, a holiday even though not traditional, becoming more and more popular in recent years.

A children fest is held in the so-called "Doctors' Garden" in downtown Sofia Sunday. It includes two contests – for the scariest costume and the best Jack-O-Lantern while volunteers will read frightening stories.

The movie theater chain "Arena" is organizing across the country face paintings, and a "Scary Photo Studio" where people can dress in Halloween costumes and take pictures. The entertainment is available free of charge for all moviegoers with a regular box office ticket.

Many night clubs are introducing a special Halloween dress code for Sunday evening with costume contests.

Halloween is observed on October 31, primarily in the United States, Canada, Ireland, and the United Kingdom. Today this is largely a secular celebration, whose roots are traced to the Celtic festival of Samhain and the Christian holiday All Saints' Day.

In Scotland the spirits were impersonated by young men dressed in white with masked, veiled or blackened faces.

Samhain was also a time to take stock of food supplies and slaughter livestock for winter stores. Bonfires played a large part in the festivities. All other fires were doused and each home lit their hearth from the bonfire. The bones of slaughtered livestock were cast into its flames. Sometimes two bonfires would be built side-by-side, and people and their livestock would walk between them as a cleansing ritual.

Another common practice was divination, which often involved the use of food and drink.

The word Halloween is first attested in the 16th century and represents a Scottish variant of the fuller All-Hallows-Even ("evening"), that is, the night before All Hallows Day.

Halloween is not celebrated in all countries and regions of the world and among those that do the traditions and importance of the celebration vary significantly.

Celebration in the United States and Canada has had a significant impact on how the holiday is observed in other nations. This larger North American influence, particularly in iconic and commercial elements, has extended to places such as South America, Australia, Europe, Japan, and other parts of East Asia.

Trick-or-treating is a customary celebration for children on Halloween. Children go in costume from house to house, asking for treats such as candy or sometimes money, with the question, "Trick or treat?"

Halloween costumes are traditionally modeled after monsters such as ghosts, skeletons, witches, and devils. Over time, the costume selection extended to include popular characters from fiction, celebrities, and generic archetypes such as ninjas and princesses.