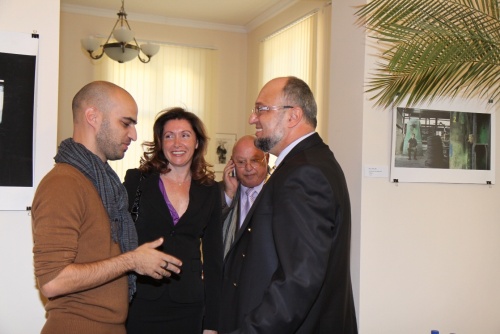 The Bulgarian MEP from the ruling GERB party, Emil Stoyanov (r), hosts the exhibit of Israeli artists under his capacity of member of the EP Delegation for Israeli Relations. Photo by www.emilstoyanovmep.eu

Bulgaria's second largest city of Plovdiv became Friday the host of an exhibit of works of Israel's top artists.

The exhibit, including masterpieces of over 10 Israeli authors, is on display at the office of the Bulgarian Member of the European Parliament from the ruling Citizens for European Development of Bulgaria (GERB) party, Emil Stoyanov, and promises to become on of the key Bulgaria-Israel art events of the year.

The display was officially opened by the Ambassador of the State of Israel to Bulgaria, Noah Gal Gendler, and Deputy Foreign Minister, Dimitar Tsachev, in the presence of the Israeli Member of the Parliament, Lia Shemtov, the Mayor of Haifa, Israel Savion, and members of the Bulgarian Jewish community.

The event was covered by the largest circulating daily in Israel – Haaretz.

Stoyanov is the organizer of the exhibit under his capacity of member if the EP Delegation for Israeli Relations.