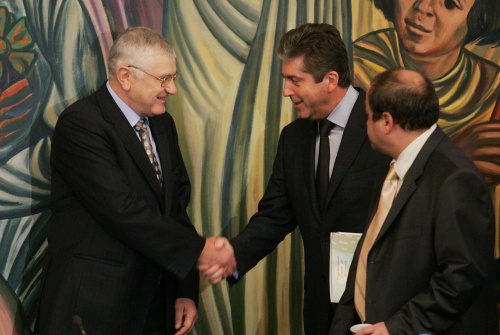 Bulgaria's President, Georgi Parvanov, confirmed Friday that a national summit on his future political project will be held on November 11.

Parvanov spoke upon the conclusion of the forum dedicated to the strategic economic priorities for Bulgaria titled "Strategic Priorities for the Bulgarian Economy within the Europe 2020 Strategy."

"We are about to launch soon in public space a large-scale, civic initiative, which is already underway, but I am not saying November 11 would be the day of its establishment," the President, cited by the Bulgarian daily "Dnevnik," told the media.

According to Parvanov, the said initiative would include representatives of many sectors - mayors, doctors, teachers, NGOs, educators, politicians, without their participation meaning a commitment from their own respective political parties.

"There is no way now the new political project won't happen, because the President already said "A." For sure he will also say "B" and "V", Prof. Krastyo Petkov, reported to be an active participant in the future political project, further told journalists at the economy forum.

Bulgaria's Prime Minister, Boyko Borisov, who is in Brussels, commented Parvanov's plans mean that in the next year the country will have to function without a president.