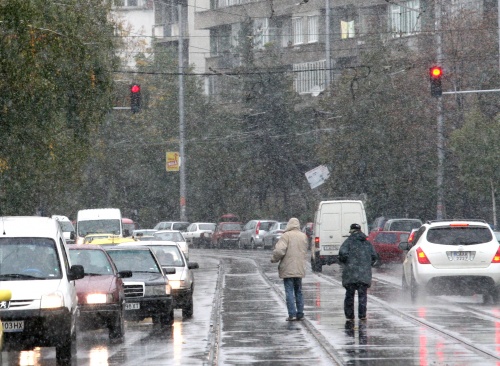 Even though the first snow in the Bulgarian capital happened on Wednesday, ti was insignificant and serious snow is expected in the second half of November. Photo by BGNES

Real snowfall will begin after November 20, according to Petar Yankov, a meteorologist from the Bulgarian company TV-MET.

According to his weather forecast, during the weekend the temperatures will rise to about 15 degrees Celsius. Even in the mountain areas the weather will be warmer. The reason is the combination of high atmosphere pressure and the transfer of warm air from southwest.

In the first five days of November, the temperatures will be between 15 and 20 degrees, reaching 23 degrees at some places.

It will be foggy and cloudy, occasionally with brief rain in the mornings, in the low areas along the valleys of rivers and lakes, and along the Black Sea coast.

The cloudiness will increase on November 6-9. The maximum temperatures will be between 12 and 17 degrees. The weather in the next three-four days will be even warmer.

Rainfalls will appear around November 15 and insignificant amount of snow will fall in the mountains. The second half of the month will be cloudy, chilly and foggy. Sunny days will be an exception.

The first serious snowfall could occur after November 20, according to the meteorologists.