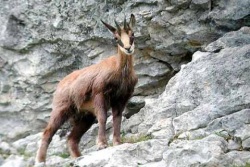 The permit regime for shooting chamois in Bulgaria will not be relaxed, in spite of earlier legislative plans to do so.

Thursday the Bulgarian Parliament voted on second reading a similar relaxing of the regime for shooting bears, which will see the Minister of Agriculture issuing permits, instead of the Minister of Enviornment, as it has been up to now.

This was motivated by an increased number of bear attacks against humans and their property, particularly in the Rhodope Mountains, which have led to the death of one person over the summer.

In an hard to fathom move, the initial version of the bill already adopted at first reading included a similarly eased procedure for getting a permit to shoot a chamois. It was perplexingly defended by ruling GERB party MP Emil Dimitrov on the grounds that more chamois killed will actually boost their population in Bulgaria.

Before becoming a MP Dimitrov was part of the management of two hunting societies.

The proposal for legislative amendment had provoked the outcry not only of environmentalists, but also of MPs across the political spectrum - from the Bulgarian Socialist Party and the Movement for Rights and Freedoms to the rightist Blue Coalition.

They claimed the proposals were designed to serve private interests of hunting societies, in particular relating to hunting tourism.

Environmentalists also had issues with the bear part of the amendment, claiming that the Minister of Agriculture, who is in charge of forestry affairs in Bulgaria, cannot grant hunting permits given he is not responsible for the preservation of protected species. The Ministry of Environment had issued a similar position, but nevertheless approved the amendment.

A yearly quota of bears that can be killed will continue do be determined by a national council including representatives of both ministries. The quota cannot exceed 8% of the total number of bears residing in Bulgaria.