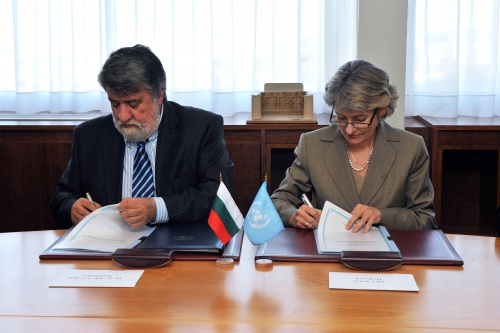 Vezhdi Rashidov and Irina Bokova signed the agreement in Paris on Monday. Photo by BGNES

Bulgaria's Culture Minister, Vezhdi Rashidov, and UNESCO Director-General, Irina Bokova, have signed an agreement for opening of a Regional Center for Intangible Cultural Heritage of Southeastern Europe in Sofia.

"I am very happy that we signed this important document. Selecting Bulgaria for the creation of a Regional center of UNESCO is a recognition for the efforts of the country to maintain the rich intangible cultural heritage and to share its valuable experience with the Eastern European countries," Rashidov said.

He assured that Bulgarian will continue to be a responsible partner of UNESCO.

Bokova also said that the agreement showed the important role of Bulgaria in the protection of the intangible cultural heritage.

"I am sure that Bulgaria will become a leader among the Southeastern European countries thanks to its experience and the work of the Regional center," she said.

At the meeting Monday, Rashidov presented the suggestions by Bulgaria's PM Boyko Borisov and

Turkey's PM Recep Tayyip Erdogan for the inclusion of the Dzhumaya Mosque in the Bulgarian city of Plovdiv and the Bulgarian St. Stephen Church, aka Bulgarian Iron Church, in Istanbul in the UNESCO World Heritage List.

Bokova has welcomed the idea and added that this would set an example for other countries in the world.

The culture minister also presented the measures, taken by the Bulgarian government, for the removal of the irregularities in the conservation of Nessebar as a UNESCO World Heritage Site.

Seven illegal constructions will be removed from the Ancient City of Nessebar in the next weeks. In November, experts from the UNESCO World Heritage Center will arrive in Bulgaria in order to check on the Black Sea resort.

The illegal construction and commercial activities in Nessebar have almost cost the resort its UNESCO World Heritage status.