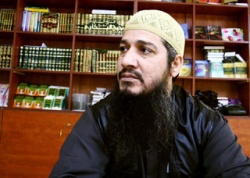 Sheikh Abu Sharif has announced that since Bulgaria is sending troops in Afghanistan to suport the United States, then it is viewed as a "legitimate target" by terrorist organization. Photo by hughmacleod.co.uk

Bulgaria is a legitimate target of al-Qaeda because it has sent its soldiers to support the US invaders in Iraq and Afghanistan, the Lebanon-based Sunni extremist group Asbat al-Ansar has announced.

In an interview for the Bulgarian daily "24 Hours," Sheikh Abu Sharif, the spokesman of Asbat al-Ansar, has threatened the Bulgarian government to pull out its troops from Afghanistan before it is too late.

His statement was made in Ayn al-Hilwah Palestinian refugee camp near Sidon in southern Lebanon in the presence of the leader Haytham Abd Al-Karim Al Sa'di, aka Abu Tariq.

"We have to be very vigilant when receiving a warning, coming from an extremist organization like this one," said the director of the National Intelligence Service (NRS), Kircho Kirov.

The warning from Asbat al-Ansar came after the Bulgarian Minister of Defense, Anyu Angelov, announced that there are plans to dispatch a 700-strong combat unit to boost its troops in Afghanistan as of 2013.

At present, the Bulgarian contingents in Afghanistan, numbering 600 troops, are based in three locations – Kabul, Kandahar and Herat.

The Bulgarian Foreign Minister, Nikolay Mladenov, has denied Angelov's statement. However, the two ministries came out with one statement, regarding the threats.

"Our participation in various mission makes us part of the common threats, which are directed not only towards us, but also to all other countries that have military forces abroad. Therefore, although we currently do not have a specific information for a direct threat, we should be very vigilant," the statement said.

Asbat al-Ansar is featured in the United States' list of terrorist organizations for alleged connections with Osama bin Laden's al-Qaeda. The leader of the group is Ahmad Abdel Karim al-Saadi, aka Abu Mahjan. After he went underground in 1999, his brother, Abu Tariq, has fronted the group.

The organization believes in a strict interpretation of Islam. It employs a "defensive jihad" to fight perceived attacks on Islam. As such, the group seeks to purge any Western influences or anything deemed un-Islamic from Lebanon.

In 2004, Asbat al-Ansar voiced vocal condemnation of the US presence in Iraq and urged insurgents to kill US personnel.

The group has also cooperated with another organization, al-Tawhid wal-Jihad, which was responsible for the beheading of the Bulgarian truck drivers Ivaylo Kepov and Georgi Lazov in July 2004.

Bulgaria's Ministry of Defense and Foreign Ministry have announced they were taking the threats very seriously.

"Such warnings are a practice of all terrorist organizations that are connected to al-Qaeda. But they cannot dissuade out determination, and the will of the entire international community, to help the Afghan people and to support the building of stable institutions for governance and security in the country," the ministries have announced.

According to Mohd Abuasi, an expert from the Bulgarian Center for Middle East Studies, Bulgaria is not a priority for al-Qaeda or other jihad organizations because they do not know much about it, but there is a real possibility that they start paying attention to it.

"Some officials' make statements that sound anti-Islam, like the statements by the minister of defense that Syria and Iran are a threat to the country. Also, the ridiculous police operations against Muslims in the Rhodopes are absolutely groundless and only create tension. If this continues, terrorist organizations will start looking at Bulgaria as a target," Abuasi said.