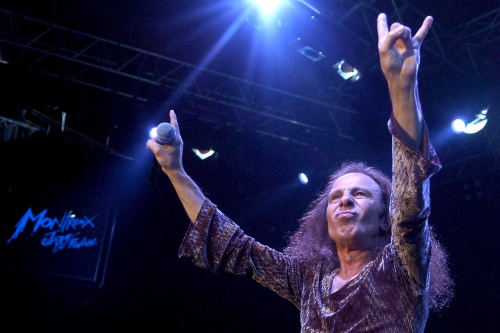 Joey DeMaio from heavy metal greats Manowar and ex AC/DC and Dio drummer Simon Wright will be among the guests at the unveiling of the world's first monument to late legendary rock singer Ronnie James Dio, in Bulgaria's Kavarna.

The ceremony is to be held at 14.00 EET in Kavarna, which has turned into a center for rock and metal music in Bulgaria.

It will also be attended by Bulgarian football legend Krasimir Balakov and many private guests from Bulgaria and abroad.

Legendary singer Ronnie James Dio passed away on May 16, 2010 after a long and hard battle with stomach cancer.

His wonderful voice, preserved on the records of the bands Rainbow, Black Sabbath and Dio, left an ineraseable trace in the history of rock and metal and in the hearts of music-lovers.

The Kavarna Dio statue was commissioned by the town council and executed by Bulgarian sculptors Alexander Petrov and Krasimir Krasev-Lomski. It presents a life-size statue of Dio.