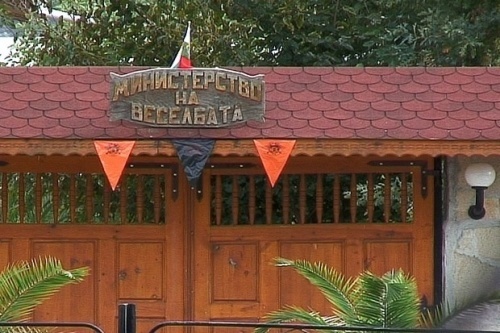 The gate of Parishev's house in the so-called "Customs Agents Village" on the shore of the Ivaylovgrad dam in southern Bulgaria. The sign says: "Ministry of Fun." Photo by DarikNews.

The notorious businessman from the town of Svilengrad in southern Bulgaria, Pavlin Parishev, says he no longer has as much money as others believe.

Parishev, also known as the "Minister of Fun," over the sign he placed at the gate of his sprawling real estate reading "Ministry of Fun," told the Bulgarian daily "24 Hours" he had to "fire" all his "deputies and secretaries and to part with the reindeer previously populating his yard."

The property is located in the vacation village of Stavri Dimovo on the banks of the Ivaylovgrad dam, "lovingly" called by locals the Customs Agents Village over the luxury mansion properties belonging to people from Sofia and the southeastern border town of Svilengrad, who are mostly senior civil servants such as Customs agents, traffic cops as well as businessmen.

The village made headlines last week when employees of the National Revenue Agency flew in a helicopter over the properties, built illegally on State lands on the dam's shore, and took pictures of the sprawling real estate.

"There is no longer a Ministry of Fun. I am alone and a Minister without Portfolio. I named the property when times were better, jollier," Parishev, who is believed to be one of the wealthiest people in Svilengrad says.

Until recently, he was the Deputy Head of the "Road Taxes and Permits" department at the Capitan Andreevo cross border point between Bulgaria and Turkey.

The eccentric businessman has made headlines for receiving a baby lion as a gift from friends and building a chapel with his brother Nikolay in their yard, naming it after themselves "Saints Pavel and Nikolay."

Parishevi's father Kosta is known to be the right hand of Turkish multi-millionaire Fuat Gyuven, managing the major part of Gyuven's assets in Bulgaria.