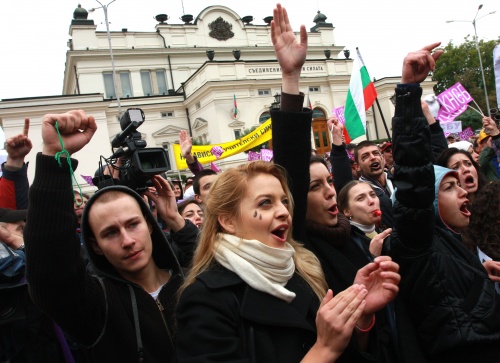 Thousands marched in Sofia last Thrusday in protest over the government's social policy. Photo by BGNES.

The tweaks in the Bulgarian welfare system recently proposed by cabinet in a bid to boost security funds are facing failure after government, trade unions and employers came out of Tuesday's negotiations in discord.

Plamen Dimitrov, the newly elected leader of one of the two major trade unions in the country, the Confederation of Independent Trade Unions, accused Minister of Finance Simeon Djankov of "exploding" the dialogue by proposing an unpalatable 1.5% up in pension payments and an upping of work experience required for retirement to boot.

The initial government proposal announced last week by PM Boyko Borisov was for a 3% in the amount paid by workers and employers for retirement funds and a retraction of the upping of the retirement requirement.

Just days later Djankov announced that the planned upping will be just 2%, after employers' organizations expressed their discontent at the intended measures.

The three-way talks are now turning into a farce in which memoranda are signed and promises made only to be repealed or completely transformed on the following day.

Bozhidar Danev, the president of one of the employer's organizations, the Bulgarian Industrial Association, stated that on their part employers are against all upping in pension installments and will accept a raise only if the burden is split half-to-half between employers and employees.

Businesses have raised strong concern that the intended measures will prove detrimental to their operations and will boost the gray economy.

Trade unionists have reported that Minister of Labor Totyu Mladenov was apparently "shocked" to hear Djankov's latest proposal and they insisted that PM Borisov intervene to order the workings of his ministers.

There was talk that if the initial proposal is adopted, the draft state budget for 2011 tabled to Parliament October 1 will have to be retracted for review.

The measures were initially proposed by cabinet a week ago to assuage fears over a looming protest of medical workers. In a hard to grasp piece of financial reasoning, the government promised to up pension payments to fill the coffers of the retirement fund in order to boost the healthcare fund. The healthcare fund, it argued, was continually being depleted by being used to fill gaps in the failing retiremend fund.