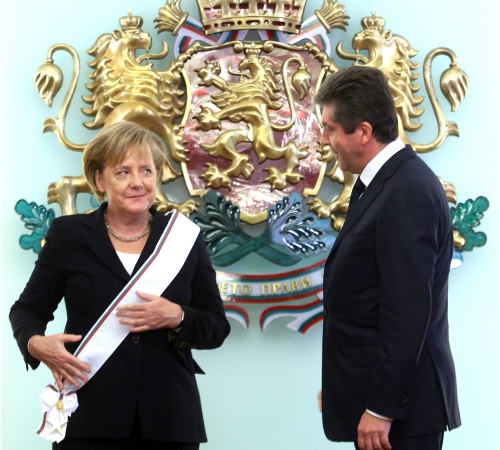 German Chancellor Merkel looks at Bulgarian President Parvanov seconds after he presented her with the highest Bulgarian state order. Photo by BGNES

German Chancellor Angela Merkel has been honored with special medals and titles during her first ever visit to Bulgaria.

Parvanov explained Merkel grabbed the medal for her contribution to the release of the seven Bulgarian medics jailed in Libya (1999-2007), to the deepening of Bulgarian-German relations, and to the support that Germany granted Bulgaria for the latter's accession to the European Union.

"Bulgaria is on a very good road, with a future. The fact that I am awarded this order will make me speak more about Bulgaria, about our political cooperation, especially in the region of the Western Balkans where we work together to encourage peace and stability. A lot of Germans are not aware of our culture relations, and of how many Bulgarians study in Germany," the German Chancellor said upon receiving the Stara Planina (i.e. "Balkan Mountain") medal.

Bulgaria's President Georgi Parvanov in turn elaborated that there are many facts behind the general statement that Merkel has been awarded the medal for her "contribution to the Bulgarian-German relations."

"This state order is a recognition of the role that Chancellor Merkel has played in Bulgaria's contemporary history as one of the key European leaders," Parvanov declared.

He explicitly emphasized her diplomatic initiative and tact for the rescue of the seven Bulgaria medics who got sentenced to death in Libya in an almost decade-long trial that attracted global attention.

In a separate ceremony, Angela Merkel was awarded the title of doctor honoris causa of Ruse University "Angel Kanchev."