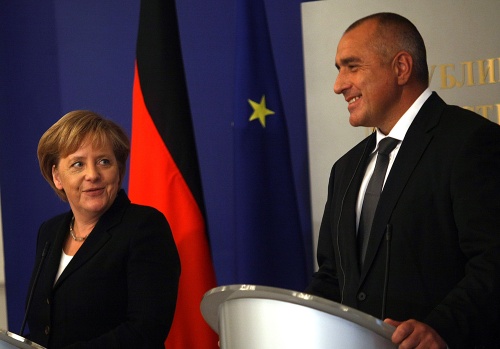 German Chancellor Merkel and Bulgarian PM Borisov are smiling during their joint news conference in Sofia Monday. Photo by BGNES

"Bulgaria conducts a stable fiscal policy. Bulgaria contributes to the stability that is necessary for the European area, and that is being implemented here," declared the Chancellor of Germany during her joint news conference with Bulgarian Prime Minister Boyko Borisov.

"With our healthy fiscal policy we guarantee that we will not transfer any problems of ours on your soil, as our neighbors did," Borisov told Merkel apparently referring to the worsened state finances of Greece that affected the stability of the euro zone.

Merkel urged the Bulgarian government to boost the absorption of EU money for the realization of large infrastructure projects, which should contribute to the development of the Bulgarian economy a great deal, including by creating new jobs.

The German Chancellor also declared her all-out support for the expansion of Bulgarian-German economic relations. Germany, the largest economy in the EU and the euro zone, is Bulgaria's No. trading partner.

In addition to Bulgaria’s fiscal stability, Merkel commended the Borisov government for taking steps to crack down on corruption and organized crime.

“The Bulgarian government has made crucial steps in this respect,” she said.

With respect to Bulgaria’s prospects of being admitted to the Schengen Agreement in March 2011, as the Borisov government hopes, the Chancellor said Germany will make a final decision in November 2010.

She emphasized that the decision whether to back Bulgaria for Schengen will not be political but will be based on a fair and just review of the set criteria.

“Germany always examines the fulfillment of the criteria. This is how we will go about the Schengen membership of Bulgaria and Romania. I cannot say today what our decision will be but it will be just. For us, it is essential that there is no corruption in issuing visas, and that the rule of law is upheld. These questions have nothing to do with the Roma issue,” Merkel explained making it clear that the expulsion of Bulgarian and Romania Roma citizens from France in the past few months would bear no reflection on the two country’s prospects to join the Schengen Area.

The German state leader said Romania and Bulgaria will be viewed separately when their fitness for the Schengen passport control agreement is evaluated.

“We should not advertise ourselves as being better than any other state. I wish good luck to Romania,” said Borisov who over the past weeks hinted that the decoupling of the two newest EU member states in their consideration for Schengen could be more beneficial to Bulgaria.

“If Germany backs Bulgaria for Schengen in November, we won’t stop, we will double and triple our efforts to be a reliable external border of Europe what we are at present,” the Bulgarian PM told Merkel.

He used his news conference with the German Chancellor to announce a large-scale operation of the police and the Customs Agency to crack down on cigarette contraband destined for Germany, and another instance of busting a euro banknotes forging scheme.

Merkel’s Monday’s visit to Bulgaria was her first. Even though Bulgarian PM Borisov has met with Merkel several times, they wer all on German soil. Their last meeting was in January in Berlin. Borisov has oftentimes referred to Merkel as one of his teachers in politics.

After her visit in Sofia, the German Chancellor is flying off to the Romanian capital Bucharest.