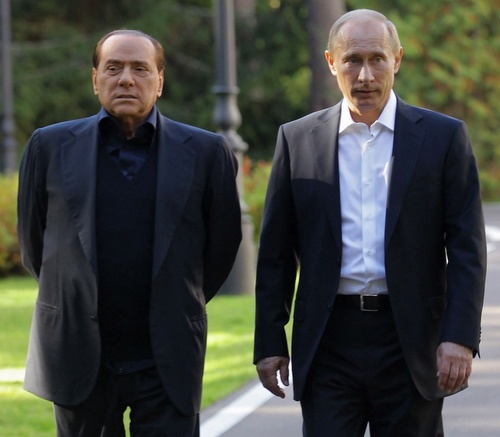 Russian Prime Minister Vladimir Putin (right) and his Italian counterpart Silvio Berlusconi (left) during their meeting at a residence outside St.Petersburg. EPA/BGNES

Bulgaria is the country which was named as problematic for the realization of the South Stream gas transit pipeline mentioned by Italian PM Berlusconi in St. Petersburg on Saturday.

The South Stream pipeline, which is supposed to bring Russian natural to Southern and Central Europe by going around Belarus and Ukraine, is facing some troubles that were discussed by Berlusconi and his Russian counterpart Vladimir Putin, the Russian papep Nezavisimaya Gazeta writes on Monday in an article entitled "Bulgarian Stumbling Block for South Stream."

"Right now, there remain some issues that relate to the passage of this project through some of the country. I will probably work from a diplomatic point of view on one of the countries to convince it not not to put forward any difficulties on this project," said Berlusconi without specifying which is the country in question.

Nezavisimaya Gazeta, however, quotes analysts, who believe that the problematic country along the route could be only Bulgaria. It reports that the issues with the pipeline going through Turkey's exclusive economic zone (EEZ) in the Black Sea have almost been resolved.

The cited Russian experts are convinced that Bulgaria is the major factor stalling the pipe, as it is trying to wrest additional benefits for itself from the shareholders. What is more, the EU itself is said to have certain claims for the pipeline as it is hoping to diversify its natural gas supplies, most notably with the Nabucco pipeline.

Nezavisimaya Gazetta says that while Turkey used to be the main problem for South Stream – as it issued a permit for surveys of its Black Sea shelf but was slow in issuing a permit for the construction of the actual pipeline, now Bulgaria as emerged as the main stumbling stone with the new center-right government in power since July 2009 "threatening to terminate all energy contracts that its predecessors made with Moscow."

The paper says that in order to get the go-ahead for South Stream from Bulgarian Prime Minister Boyko Borisov in July 2010, Moscow had to make certain concessions, including the reduction of the natural gas prices for Bulgarian consumers and altering the fees it pays Bulgaria for its gas transit to Turkey and Greece.

It adds that at the beginning of August 2010, Serbia, which also a partner in South Stream, made an agreement with Bulgaria about the route of the pipe that could make the project more expensive. Commenting on the situation, the experts approached by Nezavisimiya Gazerta say Bulgaria is the major factor creating issues for the project.

"I can think of only one problematic country – this is Bulgaria. The fears that the gas pipeline might go around Bulgaria, and through Romania are not accidental. Most probably, the Bulgarians want new concessions from Moscow. They will most likely agree if they get some benefits such as favorable credits, and participation in the construction of Bulgarian subcontractors. As far as Europe is concerned, it could be a serious obstacle for South Stream, if the realization of the alternative project Nabucco was not being delayed. But despite its desire to diversify its energy supplies, Brussels has nothing to do," says Sergey Pravosudov from Russia's National Energy Institute.

"As far as the stumbling block is concerned, this is probably Bulgaria which expects clear explanations from Russia with respect to the energy projects such as the Burgas-Alexandroupolis oil pipeline. By the way, Russia is ready to realize another similar project, Samsun-Ceyhan, through Turkey," says Mikhail Krutihin, partner at the RusEnergy consultancy.

He believes that Sofia is trying to wrest certain benefits for itself. At the same time, he deems it likely that some of the countries along the route of South Stream will try to buy the Russian gas at their border, and then to reexport it.

Krutihin says Gazprom is trying to get the European Commission to give South Stream a status as part of the Trans-European Network, which would accelerate the realization of the project a great deal. He points out that when a similar Russian project, North Stream, got such status, its construction went ahead with record speed.

The expert has pointed out that the estimates that South Stream will cost about USD 23 B are a substantial issue as the transit states would have no money to fund the sections on their territory.

During their meeting on Saturday in St. Petersburg, Berlusconi and Putin welcomed the idea of having German companies join in as shareholders. There is no indication as to how the joining of RWE or some other German company would re-apportion the stakes.