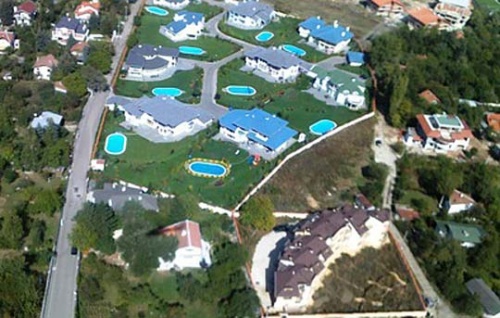 Pictures of upscale Sofia suburbs, made by revenue agents from above, show mansions with pools, tennis and mini golf courts. Photo by NRA

The majority of the buildings filmed by the Bulgarian National Revenue Agency (NRA) lack permits for their use and their owners failed to pay taxes to the Sofia City Hall even though they occupy these homes for years.

The statement was made Monday by the Sofia Chief Architect, Petar Dikov, who spoke in an interview for the Bulgarian National Radio, BNR, saying he was pleasantly surprised by the outstanding architectural design he noticed on quite a few pictures.

Last week, a NRA team videotaped from a helicopter properties in several affluent Sofia suburbs. It was discovered some of the properties are not included in any registries and do not have permits for their use, while others are listed as office buildings, but are actually residencies with pools, tennis and mini golf courts, and playgrounds.

The NRA Director, Krasimir Stefanov, says the owners are guilty of tax crimes because they have received a tax deduction for constructing office buildings, but use them for different purposes.

Dikov pointed out NRA and the City Hall must work together and unite their information systems, adding despite the startling display of wealth, one must be careful to separate those who earned their money legally and built beautiful houses from the true criminals.

"I, however, do not see this operation as a bounty hunt. I saw buildings that should not be where they are. The City Hall will carry out a parallel probe. Plenty of money from the Transition Period that should have been invested in infrastructure and industry went for the purchase of yachts, and private airplanes, and we will suffer the consequences for a long time," the Chief Architect said.

In addition, Prime Minister, Boyko Borisov, said over the weekend he will decide Monday if the illegal vacation village, near the "Ivaylovgrad" dam in southern Bulgaria will be destroyed or the properties would be confiscated by the State.

The luxury mansion properties belong to people from Sofia and the southeastern border town of Svilengrad, who are mostly senior civil servants such as customs agents and traffic cops as well as businessmen.