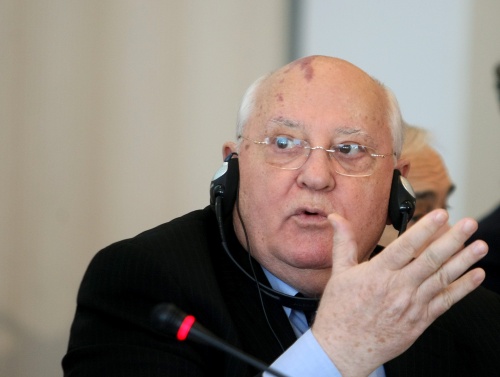 "Todor Zhivkov did a lot for Bulgaria, even during the period when I was in charge of the USSR (i.e. the late 1980s). He used his capabilities in order to outsmart his colleagues. He was a very capable person," Gorbachev said on the second day of the forum "Europe Looks East" in Sofia.

The two-day conference, which began Thursday. is organized by "New Policy Forum", an NGO founded by Gorbachev, and the Bulgarian "Slaviani Foundation" with President Zakhari Zakhariev.

According to Gorbachev, Todor Zhivkov, the longest-ruling communist dictator in the former Soviet Bloc in Eastern Europe (1954-1989) was a crucial figure for Bulgaria's modernization – the transformation of the Bulgarian society from a predominantly rural to a predominantly urban one.

In the last years of his life, Zhivkov, who died in 1998 under house arrest in Sofia, widely criticized Gorbachev for his "perestroika" claiming that his own (Zhivkov's) planned model of restructuring of the state-owned economy would have worked better. Indeed, in the last couple of years before his deposition on November 10, 1989, Zhivkov started criticizing the planned economy and to speak of switching to other forms of economic management that he never really clarified.

The late 1980s, i.e. the period when Gorbachev was in charge of the USSR (1985-1991) were the time when the Bulgarian Communist Party led by Zhivkov undertook the notorious assimilation campaign of Bulgarian Muslims and Bulgarian Turks, the so called "Regeneration-" or "Revival Process" when consisted of pressuring Muslims to adopt Slavic Christian names. This led to the mass exodus of 200 000 – 300 000 ethnic Turks to Turkey (even though about half came back after the regime collapsed in 1989). Back then a war between Bulgaria and Turkey is believed to have been prevented only by the rigidity of the Cold War blocs, in which Bulgaria enjoyed the Soviet cover within the Warsaw Pact.

On Friday, Gorbachev also said that the Russian leadership is not really concerned by the fact that the USA is using military bases in Bulgaria and Romania. He did emphasize, however, what he saw as a worrying global trend of militarization, which, in his words, has "reached unprecedented levels."

"Medvedev is Medvedev," the former Soviet leader replied when asked to comment on some analysts' comparison between him and the present Russian President Dmitry Medvedev.

Gorbachev did wish good luck to the Putin-Medvedev tandem "to cope with what they have been assigned" under the Constitution.

„Gorbachev's major achievement was the termination of the Cold War. All countries benefitted from the so called "peace dividend that they were allowed to cash as a result of not having to spend more money on defense. Russia did not really take advantage of this dividend because it had to cope with other issues," said Fedor Lukyanov, a renowned Russian analyst.