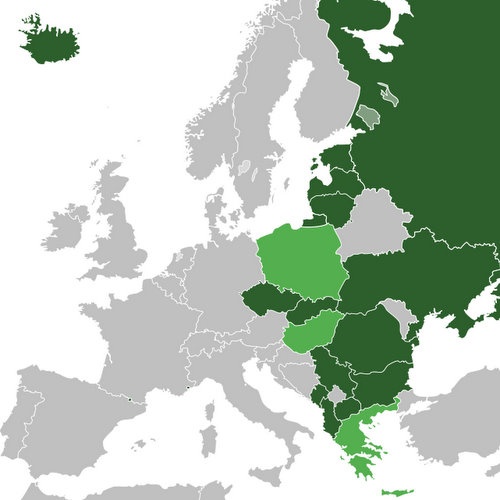 Countries in Europe with flat tax (dark green) and countries considering the introduction of flat tax (light gree), according to Wikipedia. Hungary is set to join the first group.

Bulgaria's successful example with the introduction of flat tax rates is partly the motivation for Hungary to adopt the same policy, according to Hungarian PM Viktor Orban.

"Hungary's policies must be directed towards the Hungarian market so that it can pay off its credits, and that is why we are introducing the flat tax following your example, and are reducing in half the taxes on economic entities in order to stabilize the Hungarian economy so that it does not have to resort to foreign loans," Orban told journalists in Sofia.

Bulgaria at present practically has the lowest tax rates in Europe after the introduction of flat corporate and personal income tax rates of 10% in 2008. Over the last decade and a half, a number of countries, mostly in Eastern Europe, introduced flat-rate taxation.

The policy has a number of attractive features - equality, lower tax burden, the general trend to raise budget revenue as more companies leave the "shadow economy", just to name a few.

In June 2010, Orban himself announced that his government of the conservative party Fidesz (which won a landslide victory in the April 2010 general elections) plans the introduction of a 16% flat personal income tax rate as of 2011, among other measures.

Orban explicitly pointed out that Hungary wants "to get on its legs", i.e. to recover from economic woes caused buy the global crisis.

According to Orban, the previous Socialist government ruined the Hungarian economy to the extent that the Hungarian state can no longer pay off its dues.

"The international financial institutions offered help to Hungary to prevent its economy from collapsing. We are thankful to the International Monetary Fund (IMF) for saving the Hungarian economy," he said while emphasizing that his government will work to make sure that Hungary never ends up in again in a situation to rely on foreign loans. In 2008, Hungary received a bailout loan of EUR 20 B from the IMF.