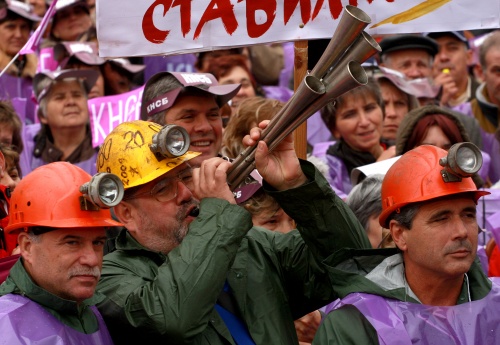 Miners were among the most active in Thursday's protests opposing the government's plans to abolish early retirement options. Photo by BGNES

The mass rally of 10 000 Bulgarian industrial workers in Sofia appears to have extracted concessions from the government on its controversial retirement reform plans.

The Bulgarian labor union KNSB (Confederation of Independent Bulgarian Syndicates) organized the protest in opposition of several social reform measures planned by the government of the center-right GERB party.

These included increasing the retirement age and the minimum number of years of service required for pension.

As the industrial workers from around the country rallied in downtown Sofia, Bulgaria's Labor Minister Totyu Mladenov, who went out to meet them, announced that the government has decided to modify its plans for pension reform in order to "cushion" the blow on those who would suffer from the controversial measures.

Bulgaria's retirement age stands at 63 years for men and 60 years for women at present. On Thursday, the government has agreed to raise it only gradually – by 4 months each year starting in 2016 for a period of nine years – until 2025. It originally planned to increase the age requirement by one year annually.

Minister Totyu Mladenov promised that the government will work together with the syndicates in order to draft the amendments to the Social Security Code that should incorporate a vision for the period until 2025.

The new decision was confirmed after a meeting of nine trade union leaders with Bulgarian Parliament Chair Tsetska Tsacheva.

"The goal of our protest was to sober up the ministers, and to make them realize the gravity of the situation in the country. The people are really worried that the government is trying to take away from them what is their right. I have been assured by the Parliament head that the MPs will take into account some of the benefits from which we are going to defend unconditionally. There is no way to deny the right of early retirement," explained Plamen Dimitrov, deputy head of KNSB, after the meeting.

The unionists tabled a protest declaration signed by 200 000 people to all major government institutions.

"Finance Minister Simeon Djankov is the man to blame. He is the person trying to strip the workers of the rights, to take away the right of miners and other industrial workers to retire early," he believes.

The syndicates have slammed the Bulgarian business sector after on Wednesday, the employers' organizations left the meeting of the informal Council for Tripartite Cooperation (including government, business, and organized labor) in protest of the government's decision to up payments for social security upon retirement by 3 percentage points in a bid to relieve the country's strained health care system. Of the 3% hike, 2% will go to the "Retirement" fund, and 1% will go to the "Unemployment" fund.

According to unionized labor, the business sector in Bulgaria has failed to increase salaries or to create new jobs despite the cuts of the social security payments required from the employers that were instituted in the past years.

Organized labor backs unconditionally the decision of the Bulgarian government to increase the social security payments by 3 percentage points.

"We will not stand idly by and take up the burden of the crisis, while the business sector shies away from take up its fair share," the union leaders have declared.

Representatives of the business sector have slammed the government for its decision on social security payments by claiming that it will debilitate Bulgaria's economic recovery, which is not that impressive anyway.

The Cabinet has expressed its hope that the businessmen will come back to the table of negotiations once again but has also made it clear that its decision on the 3 percentage point increase of social payments is firm and unyielding.