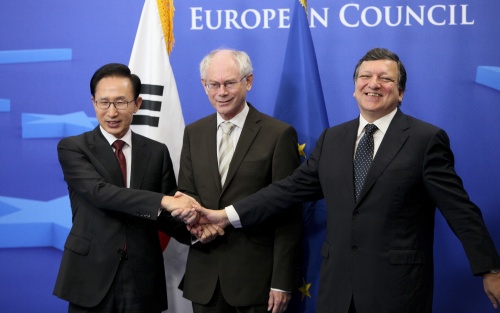 The EU and South Korea have signed a much anticipated and celebrated free-trade agreement.

The agreement requires that the EU and South Korea eliminate almost 99% of their of trade tariffs for industry and agriculture within five years, and to eliminate remaining tariffs subsequently.

It will eliminate Korean import duties worth EUR 1.6 B annually and EU duties of EUR 1.1 B, according to the EU. The pact could increase Korea’s gross domestic product by as much as 5.6 percentage points over 10 years and create as many as 253,000 jobs in Asia’s fourth- largest economy, according to a joint report by the country’s state research institutes.

The EU-Korea accord is the second-biggest such pact ever after the USD 1 T North American Free Trade Agreement (NAFTA) among the US, Canada and Mexico that began in 1994.

The EU-South Korea agreement was delayed by Italy’s objections connected with the condition of its auto industry vis-a-vis the competition from South Korea car manufacturers. Italy agreed only after securing a six-month delay in its implementation; the free-trade agreement will enter into force on July 1, 2011.

The signing of the deal followed talks between European and Asian leaders at summits in Brussels on Tuesday and Wednesday between the EU and ASEAN, South Korea, and China.

The EU has started free-trade agreement talks with Malaysia, and is planning to seek similar bilateral deals with other Asian nations.