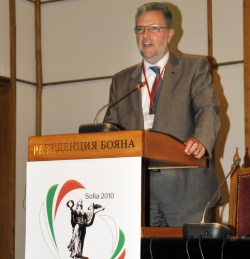 The Eurostat head has commended the reliability of the Bulgarian statistical institute NSI practically clearing the latter of even remote data cooking doubts that arose in the spring.

Walter Radermacher, the Director-General of Eurostat, who was in Sofia for the 96th Conference of the heads of statistical offices of the European Union Member States, met Friday with Bulgarian Finance Minister Simeon Djankov.

Radermacher has determined Bulgaria's National Statistical Institute (NSI) as "one of the best and fastest developing under EU standards statistical services." He assessed the work of NSI with a five out of six saying that he kept the maximum grade in order to keep the Bulgarian statisticians motivated.

Finance Minister Simeon Djankov sought to assure Radermacher that NSI will be adopting to the fullest the EU standards shortly, and will strive to be reliable partner of Eurostat and the respective services of the other EU member states.

Radermacher's statements have essentially cleared all doubts of "Greek-style" data cooking by the Bulgarian authorities that emerged in the spring of 2010 after the Bulgarian government had to revise its 2009 budget deficit figures.

In the spring of 2010, the Borisov Cabinet corrected the 2009 budget deficit to 3.9% of GDP instead of the projected 1.9%; and the government blamed the change on secret public procurement contracts signed by its predecessors in 2008 and early 2009.

The more than doubling of the 2009 budget deficit figure fueled suspicions of data cooking just months after it became clear that Greek services had faked Greece's financial data, and Bulgaria's southern neighbor turned out to have much higher deficit that previously know sparking an euro-zone-wide crisis.

As a result of the revision of Bulgaria's 2009 financial figures, the country was placed under EU's excessive deficit procedure, a mechanism to reduce its deficit below the 3% threshold set by the EU Stability and Growth Pact. What is more, however, in June, EU Economy Commissioner Olli Rehn, stated Bulgaria could become the first country to be probed by Eurostat over suspicions about the statistics methodology used, triggered by the updates in the budget and in its deficit.

The Eurostat exploratory mission to Bulgaria was completed in late September, and even though the results are not expected to come out till the end of 2010, NSI head Mariana Kotseva said the Bulgarian authorities had no reasons to be worried.

This was practically confirmed by Eurostat Director-General Radermacher in Sofia.

"The Bulgarian statistics produces solid and reliable data. We are convinced of its independence because if we weren't, we would have undertaken the respective punitive procedures against Bulgaria," Radermacher said in Sofia Friday.

"It must be clear that the ways in which the Finance Ministry does its accounts and estimates, and the ways of calculation used by the statistical services are two different things. The statistical services are obliged to work under the so called EU standard for national accounting. The subject of our recent inspection in Bulgaria was if these standards are strictly applied. Our conclusion is that all data is calculated through these standards, and the standards are applied correctly," he explained practically revealing informally the results of the Eurostat investigative mission to Bulgaria completed in September.

Radermacher further said that the case of the "cooking" of budget deficit data in Greece, which moved the EC to start respective monitoring and an infringement procedure, was that the independence of the Greek statistical service was not properly settled legally.

The Eurostat head pointed out that the recent exploratory mission of his institution to Bulgaria was not an emergency but a regular one. He also said the statements of EU Economy Commissioner Olli Rehn about the doubts with respect to the Bulgarian financial statistics had been affected by a misunderstanding.

"There is a big difference between statistics and a forecast. Statistical data is based on careful observations while the forecast is an attempt to analyze this data and to extract the respective information. It is not my job and right to assess the qualities of forecasts, I am dealing with the quality of statistics," Radermacher said.

He defined the EC Directorate-General Eurostat as an enterprise whose job is to produce information.

A major topic of the 96th conference of EU member states' statistical services in Sofia had to do with the optimization of activities necessitated by cuts in state subsidies.

The NSI head Mariana Kotseva said the budget of her institution has been reduced by 20% in 2010.

"We have to produce the same amount of information with 20% less money. Yet, we have not stopped a single study but have restructured our internal spending. This, of course, does not mean that we feel comfortable," said Kotseva.