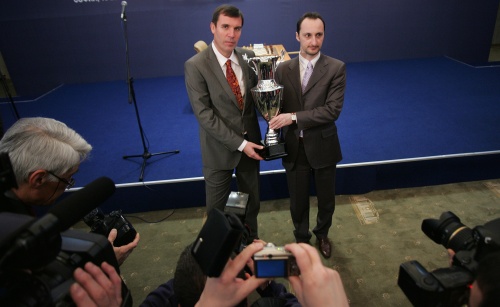 Bulgarian chess manager, Silvio Danailov (l), is the new President of the European Chess Union. Veselin Topalov is on the right. Photo by BGNES

Danailov, who is the personal manager of Bulgarian champion, Veselin Topalov, won with 30 votes, against the other main contender - Turkish Chess Federation President, Ali Nihat Yazici, who got 24 votes.

Danailov's victory is attributed to his election promise to work for the development of the ECU and the sport, for making it both professional and popular in schools.

Earlier Wednesday, the current President of World Chess Federation (FIDE), Kirsan Ilyumzhinov was reelected at the post in a battle with Anatoly Karpov.