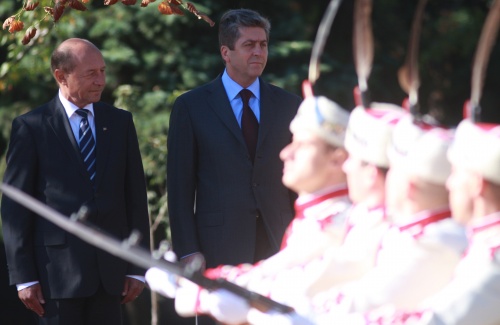 Bulgarian President Parvanov (right) with Romanian President Basescu in Sofia over the week; Basescu's visit coincided timewise with the celebrations of the end of the Romanian occupation of Southern Dobrudzha. Photo by BGNES

Bulgaria's President Georgi Parvanov took part in the celebrations for the 70th year since the recovery of Southern Dobrudzha from Romanian occupation.

Speaking in Dobrich, the main city of Southern Dobrudzha (Northeastern Bulgaria), the President declared that Bulgaria and Romania must inevitable take course towards the opening and integration of their border regions.

At the same time, he explicitly said that the Bulgarian central government owed much to the Northeast which remains one of Bulgaria's least developed regions despite the rich agricultural land there.

"We, the representatives of the central government, must commit clearly to solving the problems with the infrastructure of the region which has been neglected for years. This is the only way to live up to the legacy of our predecessors, who fought for the return of Southern Dobrudzha and for the freedom and unification of Bulgaria," Parvanov declared.

Southern Dobrudzha was under Romanian occupation in 1913-1916 and in 1919-1940, when it was formally restored to Bulgaria with the Treaty of Craiova of September 7, 1940, with the sanction of the international powers.