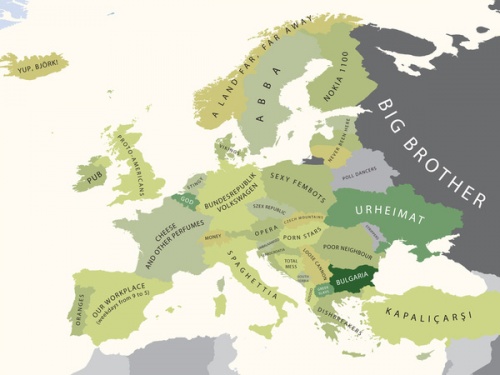 Bulgarian graphic designer and illustrator Yanko Tsvetkov has revealed seven maps of Europe reproducing what he saw as stereotypes that different nations have about European countries.

The map from the Bulgarian point of view has "God" written on the territory of Belgium. Interesting, Russia is claimed to be "Big Brother".

Neighbors Greece are identified as "Dishbreakers," while Italy is a "Spaghettia" wonderland.

Quite understandably, the UK is populated by "Proto-Americans," while the "Urheimat" of Bulgaria is the Ukraine.

The views on Bulgaria from other's perspectives represented by Tsvetkov are also amusing.

The US version has Bulgaria and neighbor Romania in a merged territory under the "Dracula" baner.

Germans are claimed to have a craving for Bulgarian "Schnapps," or rakia.

Less flatteringly, the UK sees Bulgaria as part of an amorphous territory of "Immigrants", Italians see Bulgarians as predominantly "Babysitters," while the French are deemed to classify us as outright "Poor Savages."