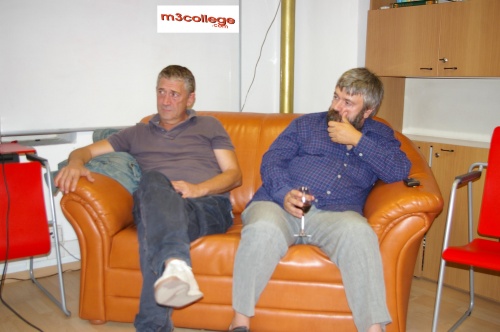 Directors Ivaylo Hristov (left) and Tedi Moskov (right) are concerned about reforms in Bulgarian theater and the lower interest of the viewers. Photo by M3 College

The Bulgarian audience is appreciating good theater less and less, according to leading local directors.

Speaking during the annual public discussion of the "PR Thursday" club of M3 College in Sofia, emblematic theater directors Ivaylo Hristov and Tedi Moskov expressed their growing concern over the decreasing levels of appreciating for culture in the country.

Moskov said he lived off his income from the 1990s meaning that several of his plays that we first shown 15-16 years still attracted many viewers; yet, he said that the plays he directed in Germany allowed him to use much more sophisticated approaches because of the higher level of the German theater-goers.

"I had to remove some elements from "Odysseus" when I directed in Bulgaria because the people here cannot understand them. For example, when the centaur wonders which one of his parents was a horse, and which – a human," Moskov explained.

Ivaylo Hristov complained that the government had cut the state subsidies for theater by 70% because of the crisis, or by BGN 18 M.

"Only the theaters on Broadway make profits. In any normal country – I mean England, France, Germany – the theaters are heavily subsidized. The average subsidy per good play in Bulgaria is BGN 10 000, which only covers the cost for the timber that is used for the settings," he explained.

He also admitted that as the head of the private "Modern Theater" he had to invest money into it from other businesses to keep it running.