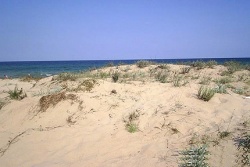 Sand dunes on the Bulgarian Black Sea coast must become exclusive property of the state, according to new legislation amendments discussed at the Ministry of Regional Development.

The ministry's plans are to prepare the draft for approval by the Council of Ministers by the end of November, after which the cabinet must table it to Parliament.

A large part of Bulgaria's Black Sea coastline is exclusive state property, but in 2008 an undetermined amount of sand dunes were taken out of that classification, which move allowed them to be sold to private individuals.

Recently environmentalists alarmed that sand dunes in the southern Bulgarian Black Sea coast near the town of Tsarevo are being dug out to clear ground for construction work.

Overconstruction and breach of protected areas are a chronic problem at the Bulgarian Black Sea coast.

Future amendments to the Law on the Black Sea Coast will mandate that artificial beaches and island will also become exclusive state property, while persons who built them would have the right to use them free of charge.

Beaches are set to be zoned according to various criteria, but that will not make for the creation of 'luxury' and 'poor' beaches, promised the ministry. All kinds of beach facilities in protected areas will be banned.

The ministry also announced that 25 of Bulgaria's 209 lack land access, because the property behind them has been sold by private individuals, who have enclosed the land. Government representatives vowed that they are doing everything in their powers to ensure public access to those beaches.