Bulgarian Culture Festival to Take Over London in November 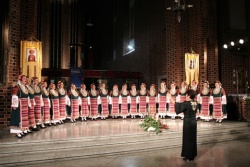 The Bulgarian State Television Female Vocal Choir will have a concert as part of the festival of Bulgarian culture in London in November. File photo

A major festival of the Bulgarian culture will be held in London in November.

The festival will begin November 2 with a concert of the Bulgarian State Television Female Vocal Choir, which is an internationally renowned ensemble that mixes traditional a cappella repertoire with modern arrangements.

The ensemble "Sofia Soloists" will also participate in the festival. Their concert will be on November 26. The organizers are hoping for the cooperation of the mayor of Sofia,Yordanka Fandakova.

On November 12, the audience will be able to see the performance of the London Bulgarian Choir, which is a London-based amateur choir, specializing in Bulgarian folk music.

The festival will also feature an art exhibition and competition. It will take place November 1-15 in the Bulgarian Embassy in London.

Bulgarian musicians, who study in schools and colleges in London, will be able to attend master classes on November 7, 14, which will end with a competition for performance of Bulgarian composition.

"This is a bold and major event, which will be measured with high standards in London. Bulgaria is too closed in its own boundaries and the ideas are often local," said the conductor Plamen Dzhurov.

He added that the festival would be a challenge because it will present many premieres of forgotten Bulgarian works.

"The whole Bulgarian-English community in London thinks much more about Sofia and Bulgaria that we imagine," Dzhurov said.

The entrance for the festival will cost about GBP 10 because the organizers have experienced difficulties with the financing. However, they have expressed their gratitude to the Bulgarian Embassy in London for the support.