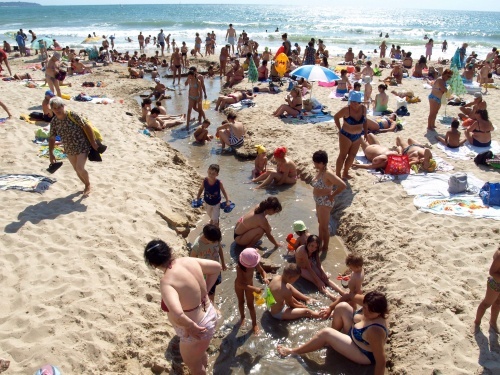 Budget has proved to be a four-letter-word for Bulgaria's tourism sector this year - while the number of foreign tourists is expected to mark a 5%-10% increase, revenues are forecast to remain flat at best.

The curve of an increasing number of foreign tourists in Bulgaria did not slump with a spade of complaints as expected, but the bad news is that the country has been dragged down to the club of the cheapest tourist destinations in Europe, people from the sector said as the season is coming to an end.

Data shows that Russia and Germany remain the traditional primary market for visitors to Bulgaria's Black Sea coast. The number of Russian tourists is expected to be up by 20%-30% this year in comparison with the previous year, tour operators say. The Russians are distributed evenly among the resorts in the Northern and Southern Black Sea coast.

In 2010 German visitors continue to be the largest single country represented within the figure of EU visitors, followed by the UK, but there is no increase in their number.

The Romanian and Polish markets are gaining in significance for the local tourism sector and Bulgarian tour operators say these could be the next big thing.

Meanwhile Israel's conflict with Turkey proved profitable for Bulgaria's tourism and the country attracted thousands of Israeli tourists, who initially planned to spend their holidays in its neighbor.

Not that rich foreign tourists like Bulgaria because it offers good value in terms of food prices and accommodation expenses and last but not least has available package tours. The all-inclusive deals that international tour operators offer to various Bulgarian resorts give them an ease of access. Most often they come to Bulgaria with their families and enjoy the traditional combination of hotel, beach and sea. Tourists who like classic packages with passable quality at good prices.

Tourism is one of, if not the most important industry for the perennially cash-strapped Bulgaria - it not only provides nearly 10% of the country's GDP, but is also a significant source of foreign currency and jobs.

Unfortunately experts have warned that quantity indices - like the number of foreign tourists visiting the Black Sea coast - can not be indicative for a small country like Bulgaria -its coastline is no longer than 380 kilometers, while beaches run for just 150 kilometers.