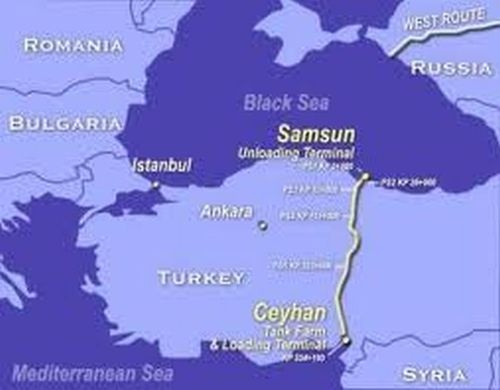 The project for the Samsun-Ceyhan oil pipeline. Map by aliraqi.net

Russia and Turkey will be starting their negotiations for the construction of the Samsun-Ceyhan oil pipeline from scratch because of disagreements, announced Russian company Transneft.

"[Turkey's] offer is to sign an inter-governmental agreement in which they are trying to get us to agree to economically unacceptable terms. Of course, we don't agree, and we are starting the new round of talks practically from scratch," declared the CEO of Transneft, one of the Russian partners in the Samsun-Ceyhan project, Nikolai Tokarev, as cited by RIA Novosti.

The Samsun-Ceyhan oil pipeline is a project to transport Russian and Caspian oil from the Black Sea to the Mediterranean by circumventing the Turkish Straits. It has been described as the major competitor of the Burgas-Alexandroupolis oil pipeline, a project of Russia, Bulgaria, and Greece, whose fate is uncertain over environmental concerns of the Bulgarian government.

The Samsun-Ceyhan pipe is supposed to run from Turkey's Black Sea city of Samsun to its Mediterranean port Ceyhan, and to have a capacity of about 60-70 million tonnes of oil per year.

Transneft CEO Tokarev has expressed his personal opinion that the negotiating parties in the Samsun-Ceyhan project must either make decisions based on reality, or must terminate what he described as a "profanity".

The agreement for the construction and operation of the Samsun-Ceyhan oil pipeline was signed in October 2009 by representatives of Russian companies Rosneft, Transneft, and Sovkomflot, the Turkish Calik Group, and the Italian Eni. Lukoil has also expressed interest in the project.

Russian Deputy PM Igor Sechin has said the investment in the pipeline will be about USD 3 B.

In Bulgaria critics of the unwillingness of the Borisov government to commit firmly to the Burgas-Alexandroupolis project have used the development of the Samsun-Ceyhan project as an argument claiming that only one of these two pipes could be built and Bulgaria will lose many benefits to Turkey if it gives up the BA pipe.

Russian officials have also made it clear that Russia would seek alternative projects with neighboring states if Bulgaria decides against participating in any joint energy projects such as the Burgas-Alexandroupolis oil pipeline.